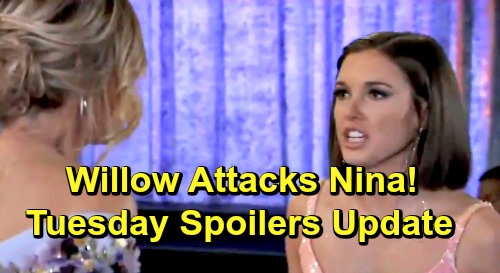 General Hospital (GH) spoilers update for Tuesday, May 21, tease that Shiloh Archer (Coby Ryan McLaughlin) will get a stern warning. Sonny Corinthos (Maurice Benard) will approach the cult leader and insist he should stay away from his daughter. Kristina Corinthos-Davis (Lexi Ainsworth) is finally free from Shiloh’s grasp, so Sonny has no intention of letting her get sucked back in.

Meanwhile, Kristina will corner Alexis Davis (Nancy Lee Grahn) and Dr. Neil Byrne (Joe Flanigan). She’ll contend that Sam McCall (Kelly Monaco) is falling under Shiloh’s spell and beg them to do something about it.

Kristina will be riled up and ready for a fight, but Alexis will urge her to stand down. She won’t want Kristina anywhere near Shiloh, so she’ll hope her daughter will agree to back off.

Nina will push Willow’s buttons until she just can’t handle it. Willow will finally declare that she doesn’t have to take any more of Nina’s crap. You go, Willow! Nina deserves to be taken down a few pegs.

Unfortunately, Willow’s birth mom secret will get out soon enough. GH spoilers say Nina will eavesdrop on Willow’s phone discussion. She’ll find out Willow had a child and so will Shiloh before long.

Elsewhere, Lucas Jones (Ryan Carnes) will grow suspicious of Brad Cooper (Parry Shen). He’ll feel like Brad’s troubled by something, but Brad will refuse to divulge what it is.

Brad may offer a bogus excuse, but Lucas knows him better than that. He’ll be able to tell that something far bigger is going on. General Hospital spoilers say Lucas will connect the birth mom dots later this week, so Brad will face backlash over his Willow secret.

However, the worst is yet to come! GH fans know “Wiley Cooper-Jones” is actually Jonah Corinthos, so Brad’s problems are just beginning.

Next, let’s talk about Dr. Hamilton Finn’s (Michael Easton) big proposal. It took a lot of work to get to this moment, but it’ll be absolutely perfect. While down on one knee, Finn will ask Anne Devane (Finola Hughes) to marry him. Anna will have sweet smile on her face, so Finn should get the answer he’s looking for.

Other General Hospital spoilers state that Lucy Coe (Lynn Herring) will do some digging. She’ll pester Felicia Scorpio (Kristina Wagner) about what’s up with Dr. Kevin Collins (Jon Lindstrom) and Ava Jerome (Maura West). Felicia may try to stonewall her, but Lucy will still feel like something strange is going on.

Ava will also lash out at Kevin on Tuesday. He’ll threaten to back out of their plot, which will leave Ava reeling. How can Kevin ditch her when they’re on the verge of taking down Ryan Chamberlain (Jon Lindstrom)?

Whether Kevin gets back on board or not, Ava will be prepared. Ryan is indeed headed back to Port Charles, but you should never underestimate the power of an angry, vengeful ex.

Finally, Oscar Nero Quartermaine’s (Garren Stitt) last message will bring a change of heart. Josslyn Jacks (Eden McCoy) will decide to head to the Nurses Ball and give the performance of a lifetime. She’ll do it for Oscar and hope that she can make it through without breaking down.

General Hospital viewers won’t want to miss Tuesday’s stunning scenes. We’ll give you updates as other GH news comes in. Stick with the ABC soap and don’t forget to check CDL often for the latest General Hospital spoilers, updates and news.