General Hospital Spoilers: GH Fans Turn Against Nina – Will You Feel Sorry for Her When Life Crumbles? 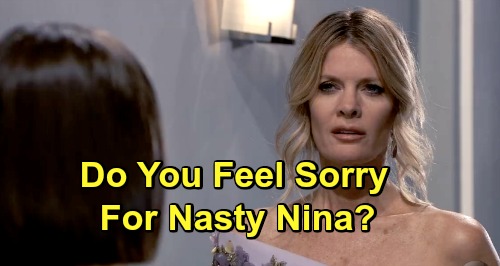 General Hospital (GH) spoilers tease that Nina Reeves’ (Michelle Stafford) world will be turned upside down. Nina has always had her fair share of lovers and haters, but it seems like the outrage has taken over now. Ever since Nina crossed paths with Willow Tait (Katelyn MacMullen), she’s become a bit of a witch.

Of course, we know the likely reason for that. Sasha Gilmore (Sofia Mattsson) isn’t Nina’s biological daughter, which means the real one will have to be revealed. It makes perfect sense for it to be Willow since GH has created all this crazy conflict. We can understand a disagreement, but Nina’s attitude is over the top. She’s out of control and that’s usually a soapy setup for a mother-daughter feud.

However, we have to ask…is General Hospital taking it too far? GH fans have probably heard by now that the role of Nina has been recast. Cynthia Watros will begin filming in early June, so it’s wise to think about the future here. It’s clear that Watros will face quite a challenge.

Recasts are a familiar part of daytime dramas, but that doesn’t mean it’s always easy to accept them. It takes time, but it’s generally easier if the recast enters on a positive note. Watros’ uphill battle could become even tougher since she’ll be portraying a bitter, vengeful version of Nina.

If you think Nina’s despicable now, can you imagine what she’ll be like after Valentine Cassadine’s (James Patrick Stuart) deception is exposed?! Nina may end up taking her anger out on Willow even more. Of course, it looks like Nina will also be to blame for Willow’s secret getting out. Nina will overhear Willow’s phone conversation and determine that Willow had a child.

General Hospital spoilers state that Nina’s words will do serious damage, so Shiloh may be tipped off thanks to her actions. That could be pretty unforgivable in Willow’s eyes. If Shiloh goes after “Wiley Cooper-Jones,” you can bet Willow will know exactly who to blame. This could drive the war between them for many months to come.

On the bright side, most GH fans are eager to see Willow fight back and put Nina in her place. After all the drama Nina’s caused and will continue to cause, will that affect the daughter shockers for you? Will you even feel sorry for Nina when Sasha is exposed as a fraud and Willow inevitably rejects her?