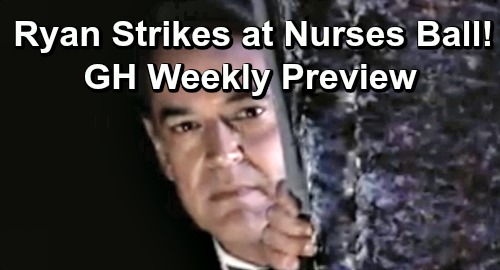 General Hospital (GH) spoilers for the week of May 20-24 tease that some shockers and showdowns are brewing. For starters, let’s talk about Willow Tait’s (Katelyn MacMullen) encounter with Nina Reeves (Michelle Stafford). She’ll literally run into Nina, which will lead to splashed Champagne and hurled insults. They’ll have a loud faceoff right in the middle of the Nurses Ball festivities.

Later, Willow will divulge something over the phone. She’ll tell someone that her baby’s father didn’t even know she was pregnant. Unfortunately, Nina will overhear part of the conversation and use it as a chance to pass judgment. She’ll look smug as she realizes Willow had a child that was given up for adoption.

Nina may contend that Willow rants about other people’s parenting skills but wouldn’t be parent herself. Of course, GH fans know the truth is far more complicated. Nina has made legitimate mistakes as Charlotte Cassadine’s (Scarlett Fernandez) almost stepmom.

Willow, on the other hand, escaped a cult and gave up her rapist’s baby to protect him. She did what was best, but Nina won’t be able to see that without the whole story.

All this drama will lead to another stunning exposure. It looks like Shiloh will put the clues together and determine that Willow gave birth to his child. He’ll confront Willow later this week, but Michael Corinthos (Chad Duell) will step up to protect her.

General Hospital spoilers say Michael will grab Shiloh and fling him across the room, so it’ll be nice to see this character in action mode.

Meanwhile, Laura Webber (Genie Francis) will have some Ryan Chamberlain (Jon Lindstrom) updates. As Curtis Ashford (Donnell Turner) stands beside her, Laura will make an urgent phone call. She’ll reveal that Ryan is alive and on his way back to Port Charles.

That’s been the goal of Ava Jerome’s (Maura West) plan with Dr. Kevin Collins (Jon Lindstrom), but it seems they’re about to lose control.

General Hospital’s weekly preview shows Ryan glaring creepily and pulling back a curtain. Based on the dark look in his eyes, there’s no denying that’s Dr. Kevin Collins’ (Jon Lindstrom) evil twin. The promo clip also appears to show Ava picking up a knife, but a gun is fired by the end of the video. It’s clear that plenty of danger’s looming in Port Charles!

Jason Morgan (Steve Burton) will definitely be armed and ready as he enters Shiloh’s lair. However, it doesn’t look like there’ll be any sign of Shiloh or Sam McCall (Kelly Monaco). Perhaps Shiloh will take Sam to another location for the rest of her initiation and botch the plan to record everything. That could leave Jason and Damian Spinelli (Bradford Anderson) scrambling to protect her.

On a happier note, General Hospital spoilers say Dr. Hamilton Finn (Michael Easton) will finally propose to Anna Devane (Finola Hughes). These two should be celebrating their engagement before the evening winds down. This is shaping up to be an excellent Nurses Ball, so don’t miss the rest of GH’s surprises.

Which Nurses Ball bombshell are you most anxious to see? We’ll keep you posted as other GH news comes in. Stay tuned to the ABC soap and don’t forget to check CDL often for the latest General Hospital spoilers, updates and news.