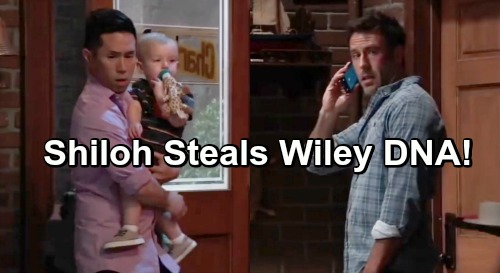 General Hospital (GH) spoilers for Monday, July 1, tease that Michael Corinthos (Chad Duell) will have a touching moment with his godson. Of course, Brad Cooper (Parry Shen) and GH fans know “Wiley Cooper-Jones” is actually Michael’s bio son, too. Michael will remain in the dark as he chats with the kid outside Charlie’s Pub. He’ll think “Wiley’s” probably wondering why everyone’s been so tense.

Michael will assure “Wiley” that he shouldn’t worry because they’re all looking out for him. General Hospital’s latest sneak peek video shows Michael saying, “And as your godfather, I’ll protect you as if you were my very own little boy, OK?” It’s always fun when GH throws in dialogue like that. Knowing that “Wiley” really is Michael’s very own little boy makes it a nice way to build suspense.

Michael will tell Brad that “Wiley’s” lucky since he’s surrounded by love. He’ll promise that they won’t let anybody take “Wiley,” but Brad will fear that keeping the kid will be easier said than done. Michael will offer more reassurance before he ultimately gives “Wiley” a kiss on the head and takes off.

That’ll leave Brad to focus on why he came to Charlie’s. He’ll tell “Wiley” they’re going to see if Grandpa Julian Jerome (William deVry) can get them some fake passports just in case. Brad clearly doesn’t have much faith in all of this turning out well!

Over with Shiloh Archer (Coby Ryan McLaughlin), he’ll call his attorney and insist he knows where “Wiley” is. Shiloh will explain how he put it all together and feel confident he got it right. When Shiloh’s attorney wonders if there’s any evidence, Shiloh will admit he doesn’t have it…yet. The wheels will start turning once Brad walks by with “Wiley.”

Shiloh will assure his lawyer that he can get proof, so what does he have up his sleeve? Will Shiloh try to steal a used pacifier of “Wiley’s” or something along those lines? He believes a DNA test will prove “Wiley” is his child, but he’s wrong about that. The results would shut this custody battle down completely.