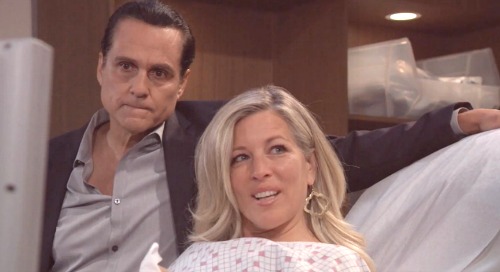 General Hospital (GH) spoilers reveal that one ABC soap story is hitting home for viewers with the same condition. Carly Corinthos (Laura Wright) was quite alarmed when her doctor found something troubling during the ultrasound. After the doctor insisted on rushing out to consult with a colleague, Carly was even more concerned.

Carly and Sonny Corinthos (Maurice Benard) later learned their baby appears to have spina bifida. The doctor informed them that they won’t know the severity until a bit closer to the birth. However, Carly was fearful when she heard all the warnings. This child could have physical limitations as well as developmental or cognitive impairments.

Of course, the doctor didn’t want Carly and Sonny jumping right to the worst-case scenario. She assured them that this kid could actually go on to live a pretty normal life. It all depends on how things are shaping up before Carly’s delivery. General Hospital spoilers say Carly will undoubtedly spend the next few months worrying and waiting. She’ll definitely need to lean on Sonny for love and support.

Since spina bifida is obviously a real issue that affects many people, some of them were quick to chime in on social media. One General Hospital fan reached out to Laura Wright and Maurice Benard on Twitter to voice her support. She was grateful to GH for highlighting her condition and shared a little about her own experience.

“I have Spina Bifida! The Dr. told me I’d never be able to walk talk or do anything but sit in my crib. Well, I’m 42(43 next month) and I never shut up,” the fan said. She sent a follow-up tweet to include a few more details. “The only thing I can’t do is walk. I never thought I’d see this story on daytime and I KNOW you two will do it justice.”

Laura Wright seemed touched by the messages and replied with words of gratitude – for both the fan’s sharing and GH’s attention to the topic. “Thank you for sharing with us !!! I’m grateful for this story,” Wright said.

It’ll be interesting to see how General Hospital tackles this plot. If Carly’s baby survives, we’ll see “CarSon” navigate the challenges and help their child live as normally as possible. Unfortunately, a lot can go wrong between now and then. Carly lands in dangerous situations occasionally, so there’s no guarantee a miscarriage won’t happen. It’s too early to say what GH has in mind.

“Is there something wrong with our baby?!?” #GH pic.twitter.com/Fp3tJctIrx