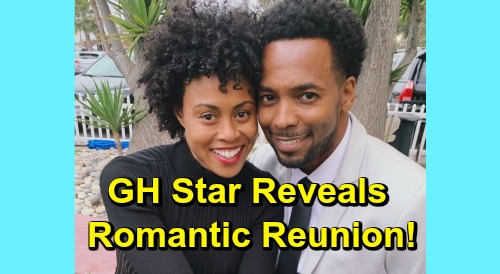 General Hospital (GH) spoilers tease that there’s some big relationship news to report. GH fans were disappointed when Vinessa Antoine (ex-Jordan Ashford) publicly revealed her split from her former General Hospital costar. She made a cute couple with Anthony Montgomery (Andre Maddox), so it was a bummer when they broke up.

Thankfully, Antoine gave everyone some positive updates on Instagram. It turns out Montgomery and Antoine are back together! They apparently had some issues to resolve, but they’ve been willing to put the work in and make it happen. True love is worth the effort, so they’re doing whatever they can to move forward and grow.

Antoine made some difficult admissions and assured fans that things are looking up. She also reflected on the experience and what it taught her. Antoine included a lengthy explanation in her Instagram post along with a sweet photo of her smiling with Montgomery.

Antoine went on to talk about how they’ve mostly chosen to keep the details of their romance private. Since Antoine revealed the split and now the reunion, it seems that’s shifting a bit. Antoine suggested that “sharing ‘us’ with ya’ll has been an interesting journey.” She may be going outside her comfort zone, but it’s nice that she didn’t leave everyone hanging since we all knew about the breakup!

Antoine opened up about how crucial it is to let go of old wounds and former flames. She hinted that her own insecurities were part of the problem, so she’s working on those and trying to trust in the new love she’s found. Antoine wrapped up the post with some words of wisdom for herself and anyone else struggling.

“It ain’t easy you guys but nobody said it would be easy,” Antoine said. “Just that it will be worth it. This is grown folks business. I love this man. And so the journey continues.” She added some hashtags to let everyone know that they’re not giving up and are beginning brand-new chapter. We wish Antoine and Montgomery the best of luck in this fresh start!