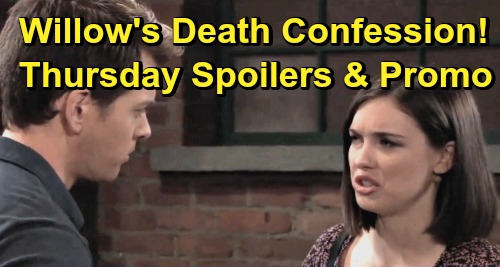 General Hospital (GH) spoilers for Thursday, June 20, tease that Michael Corinthos (Chad Duell) will push for more info. Willow Tait (Katelyn MacMullen) just blurted out that she killed her father, so Michael will certainly be taken aback. It’s worth mentioning that’s not the same story Willow gave Harrison Chase (Josh Swickard). Willow simply told Chase that her father passed away and by then, she was initiated into “The Trust.”

Willow will admit she was forced to choose between Dawn of Day or her father. We have to remember that Willow was brainwashed into believing Shiloh Archer (Coby Ryan McLaughlin) at the time. She was basically like Daisy Kwan (Kelsey Wang), a young DoD disciple who was eager to please. It was even harder on Willow since her mom, Harmony Miller (Inga Cadranel), was backing Shiloh up.

Of course, Willow may be exaggerating her role just a bit. She might’ve just played a part in the plot. While Willow explains how her father’s death went down, Diane Miller (Carolyn Hennesy) will grill Alexis Davis (Nancy Lee Grahn). She’ll wonder if Alexis has done any digging that might help. Diane will be eager to keep Shiloh away from “Wiley Cooper-Jones,” but it’s clear that Shiloh’s ready to come out swinging.

At GH, a newly reinstated Kevin Collins (Jon Lindstrom) will dish out some advice. General Hospital spoilers say the doctor will become the patient when Neil Byrne (Joe Flanigan) seeks guidance. He’ll admit he’s having feelings for one of his own patients, which naturally means he’s falling for Alexis.

Kevin might advise Neil to make a choice. There’s an easy solution if Neil wants to pursue a romantic future with Alexis. He just has to drop her as a patient and ask her out. Kevin may contend that Neil needs to either commit to helping Alexis in a professional capacity or cut her loose to date her.

Other General Hospital spoilers say Drew Cain (Billy Miller) will catch up with Franco Baldwin (Roger Howarth). He’ll confess that Kim Nero (Tamara Braun) isn’t doing so well, so Franco will hate to hear that. They’ll both hope that Kim can heal her broken heart and start to move on eventually.

Across town, Elizabeth Baldwin (Rebecca Herbst) will show Kim some love and support. During their next conversation, Kim will make a heartbreaking admission. She’ll tell Liz that she asked Julian Jerome (William deVry) to have a baby with her, which GH fans already know. Liz, however, will be quite surprised by the news. She’ll undoubtedly agree with Julian’s take on this difficult situation.

At the police station, Sonny Corinthos (Maurice Benard) will demand answers from Dev (Ashton Arbab). He’ll raise his voice as he asks why Dev’s there. Sonny just won’t understand what brought Dev all the way to Port Charles, but Dev should have a good explanation.

While Dev clears things up with Sonny, Jason Morgan (Steve Burton) will continue his chat with Carly Corinthos (Laura Wright). He’ll contend if there is evidence against Shiloh, they need to get their hands on it. Naturally, Willow’s confession to Michael could be a gamechanger!

It sounds like some shocking scenes are coming up. We’ll give you updates as other GH details emerge. Stay tuned to the ABC soap and don’t forget to check CDL often for the latest General Hospital spoilers, updates and news.