General Hospital Spoilers: Josslyn Falls for Dev, Believes Oscar Sent Her a New Love – Cameron Left Out in the Cold 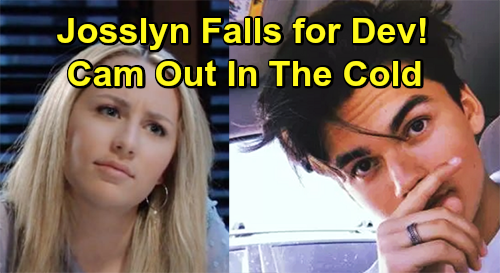 General Hospital (GH) spoilers tease that a new teen may worm his way into Josslyn Jacks’ (Eden McCoy) heart. GH fans know Josslyn was shocked to catch Dev (Ashton Arbab) robbing Lulu Falconeri’s (Emme Rylan) house. She’s clearly not too thrilled with Dev at the moment, but it may not be long until love starts to bloom.

Oscar Nero Quartermaine (Garren stitt) wanted Joss to move on after his untimely death, but he probably had someone like Cameron Webber (William Lipton) in mind. He didn’t want Josslyn to drown in grief forever, but it’s doubtful he considered bad boy Dev popping up to woo her either. Nevertheless, it’s possible Joss could start to view Dev as some sort of sign from her dead boyfriend.

After all, Dev appeared shortly after Josslyn’s séance with Cameron and Trina Robinson (Sydney Mikayla). Josslyn is desperate for some sort of message or sign from above. Dev’s arrival alone could serve as one after Joss really thinks about it.

Dev Could Be A Nice Distraction

If Joss tries one more séance or some other way to contact Oscar, she may feel like he’s leading her in Dev’s direction. Even something as simple as Dev walking in on their attempt could be enough. Josslyn might ask Oscar a question and view Dev as her answer.

Regardless, Dev is a cute kid and could be a nice distraction for Josslyn. She doesn’t feel like she needs counseling, but she could at least use a friend to confide in – perhaps one who wasn’t so close to the situation. It may be easier for Josslyn to share her feelings with someone like Dev, who didn’t know Oscar and might be happy to learn about him.

General Hospital spoilers say Sonny Corinthos (Maurice Benard) may task Dev with looking out for Joss. That could provide even more motivation to befriend her and listen to her struggles. Of course, Dev could also be a terrible influence. He’s used to being on his own and taking care of himself in Turkey. Now Dev has resorted to robbing in Port Charles, so he could be trouble!

Josslyn Jacks Is Lost And Lonely

Even so, Josslyn is feeling lost and lonely. She could easily fall for someone new, especially Dev. Josslyn has been learning to play the guitar, which she’s connected with Cameron over. Could Joss and Dev connect over music, too?

It’s worth mentioning that Arbab is a musician and singer in real life. He even released a new single on Spotify last month, so General Hospital may choose to include his talents.

Will Josslyn mistakenly assume Dev’s some heaven-sent sign from Oscar? Could this simply be a new friendship turns to love story instead? Will Cameron find himself feeling left out in the cold? We’ll give you updates as other GH news comes in. Stay tuned to the ABC soap and don’t forget to check CDL often for the latest General Hospital spoilers, updates and news.