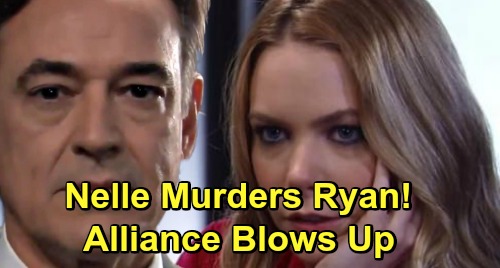 General Hospital (GH) spoilers tease that Nelle Benson (Chloe Lanier) will do some plotting at Pentonville. Her interaction with Ryan Chamberlain (Jon Lindstrom) and visit with Brad Cooper (Parry Shen) definitely seemed to affect her. Nelle’s getting fed up with her stint behind bars. She’s ready to get back out in the world and perhaps play a role in her son’s life.

Nelle suggested she might be up for early parole, but she’ll decide she’s unwilling to wait that long. That’s likely where Ryan will come in. During Ryan’s conversation with Hamilton Finn (Michael Easton), he argued that prison walls couldn’t hold him. Ryan got out of Ferncliff and can get out of Pentonville, too. That’s especially true since he’ll have sneaky Nelle on his side.

Two scheming heads are better than one, so it looks like Ryan and Nelle will join forces. Ryan seems to think it was fate for them to meet. They do have a lot in common, including their stolen kidneys, murderous tendencies and desire to break out. However, it’ll be interesting to see what happens after they pull off their goal.

General Hospital spoilers reveal that an escape is indeed coming at some point. We should note that Ava Jerome (Maura West) will be apprehensive on June 24. Franco Baldwin (Roger Howarth) will get some terrible news that same day, so it’s possible Franco and Ava will learn Ryan’s on the loose.

Of course, this storyline is surely winding down! There’s only so much more GH can do with Ryan. Now that Jordan Ashford (Briana Nicole Henry) has received Ryan’s lifesaving kidney, the show has no use for the serial killer. They could’ve just locked him up indefinitely, but this escape suggests a deadly outcome. Why else would they let Ryan out again so soon? Ryan seems poised to get murdered!

That brings us to an important question: Who could kill Ryan? Ava already plunged a knife into Ryan’s back, but it might be too predictable if she goes after him again. As for Franco, his deadly days seem to be behind him. Kevin Collins (Jon Lindstrom) might be an option if he can cover it up, but General Hospital might want someone who could actually go down for this.

What about Nelle? Chloe Lanier isn’t making a permanent comeback, so GH might as well add to Nelle’s list of crimes and lock her up again. Ryan might push Nelle too far after their joint escape and spark a fatal betrayal. Then again, he could try to kill Nelle and put her in the position to defend herself.

There’s a chance Ryan could kill Nelle, but Nelle killing Ryan makes more sense. It would get rid of Ryan, show how fierce Nelle can be, lead to her prison return and provide a nice twist. Of all the people who could take down big bad Ryan, wouldn’t it be fun to have it be this little blonde chick? Ryan may underestimate just how crazy Nelle is.