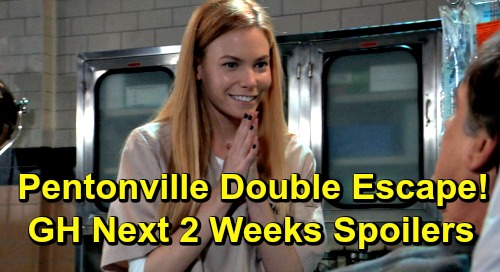 General Hospital (GH) spoilers for the next two weeks tease that some shockers will hit Port Charles. During the week of June 17-21, Maxie Jones (Kirsten Storms) will find a clue that aids her hunt for Dante Falconeri (Dominic Zamprogna). She’ll look into this lead and hope it’ll spark the “Lante” reunion she’s dreaming of. Maxie just wants Lulu Falconeri (Emme Rylan) to find happiness again.

Alas, this plan will still lead to trouble. For now, Mac Scorpio (John J. York) will worry about the story Lulu’s working on. He won’t approve of her going on dates in an attempt to catch a thief. Mac won’t like that Peter August (Wes Ramsey) approved this story. In fact, it’ll make Mac question Peter’s judgment and worry that he won’t truly protect Maxie.

Other General Hospital spoilers say Dev (Ashton Arbab) will show up to see Sonny Corinthos (Maurice Benard). Sonny will be surprised to learn Dev traveled all the way from Turkey. He’ll help the teen out and hope Dev will do him a favor as well. It looks like Dev will be tasked with growing closer to Josslyn Jacks (Eden McCoy) and keeping an eye on her. Sonny will just want to make sure Joss is OK.

As a result, Josslyn will get awfully suspicious. She may size Dev up and determine that there’s more to the story with this guy. Next, Kim Nero (Tamara Braun) will deliver a frantic plea. Will she beg Drew Cain (Billy Miller) to have a baby with her? It appears Kim will be stuck on the idea of giving Oscar Nero Quartermaine (Garren Stitt) a brother or sister, but Drew obviously won’t approve of Kim’s plan.

That could lead to Kim’s fateful choice during the week of June 24-28. General Hospital spoilers say Kim will make that decision, and Shiloh Archer (Coby Ryan McLaughlin) will be summoned to her place the next day. Will Kim opt to join Dawn of Day and try to find the peace Oscar once had there? That seems like a good possibility.

Over with Franco Baldwin (Roger Howarth), he’ll get some terrible news. Ava Jerome (Maura West) will also find herself on edge. Does that mean Ryan Chamberlain (Jon Lindstrom) will escape? General Hospital spoilers state that Nelle will make her getaway, so she may take Ryan with her when she goes. They might team up so they can make a break for it together.

GH fans can also expect some baby chaos. It seems Julian Jerome (William deVry) may have to admit that the real Wiley is dead. Of course, Julian doesn’t know that this kid is Jonah Corinthos. That’s a bomb that the show can drop later.

Regardless, Valentin will realize he needs a way to ensure that his dreams stay intact. Too bad there may be no tactic that can save his relationship! We’ll give you updates as other GH details emerge. Stick with the ABC soap and don’t forget to check CDL often for the latest General Hospital spoilers, updates and news.