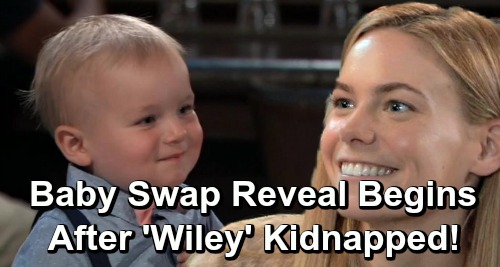 General Hospital (GH) spoilers tease that phase one of the baby swap reveal could happen soon. From the get-go, this was set up as a very layered story. It’s led to some complicated twists and will undoubtedly lead to many more. However, the most important thing here is that the real Wiley Cooper-Jones is dead and was replaced with Jonah Corinthos.

It’d be a waste for that double whammy to hit everyone at once. That’s why GH will likely divulge part of the story first. Brad Cooper (Parry Shen) told Julian Jerome (William deVry) that he traded babies with a random woman who couldn’t take care of her own child. Julian has no idea that he’s helping Brad keep Michael Corinthos’ (Chad Duell) son with Nelle Benson (Chloe Lanier).

It looks like circumstances could force Julian into a situation where he has to share the truth as he knows it. General Hospital spoilers state that Julian will feel like he should do what’s honorable. Since Nelle will escape from Pentonville soon, there’s a good chance she’ll kidnap “Wiley.” That could lead to accusations being thrown at Shiloh Archer (Coby Ryan McLaughlin).

Some interesting plot details could come from this. For starters, it could be what reveals the kid’s identity to Shiloh. He might admit that he doesn’t know where “Wiley” is, but at least he’d know which kid to go after later. It seems Lucas Jones (Ryan Carnes) will also sense that Julian knows more than he’s letting on. He’ll rev up the pressure, so Julian may admit this baby isn’t Shiloh’s.

Julian may feel the need to do right by his son and come clean. During the week of June 24-28, General Hospital spoilers say Lucas will get confirmation on his suspicions. That same week will also bring Lucas’ shocking news for Bobbie Spencer (Jacklyn Zeman) and her collapse. GH fans can expect Alexis Davis (Nancy Lee Grahn) to rip into Julian, too. The clues for a partial reveal are definitely there.

It makes sense to play out the drama of this not being the real Wiley while preserving the biggest secret – that this is actually Jonah. General Hospital spoilers say Brad will do whatever it takes to keep his family together. Will he plan to take them all on the run? What other tricks might Brad have up his sleeve?

GH viewers won’t want to miss the bombshells ahead. We’ll give you updates as other GH details emerge. Stay tuned to the ABC soap and don’t forget to check CDL often for the latest General Hospital spoilers, updates and news.