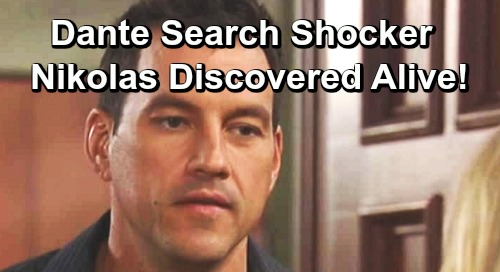 General Hospital (GH) spoilers tease that Maxie Jones (Kirsten Storms) will stick to her goal. Despite Peter August’s (Wes Ramsey) reservations, Maxie can only see the benefits when it comes to bringing Dante Falconeri (Dominic Zamprogna). She can see that Lulu Falconeri (Emme Rylan) isn’t quite the same without her hubby by her side.

However, General Hospital spoilers say Maxie and Peter’s search for Dante will lead to a huge surprise. The outcome won’t be at all what they expect. Does that mean they won’t even find Dante at the end of this hunt? Could they stumble across someone else instead?

A Soap Opera Digest blind item pointed to the return of a fan favorite not too long ago. Perhaps that was a hint about a GH comeback. Alexis Davis (Nancy Lee Grahn) is also growing closer to Dr. Neil Byrne (Joe Flanigan). She’s opened up about her complicated family on more than one occasion, and there have been rumblings for months about a Cassadine story that never seems to get going.

Maybe the time has finally come. General Hospital fans will be shocked by what this search leads to, so this is the perfect opportunity to bring Nikolas Cassadine (Tyler Christopher) back from the dead. It’s possible Christopher could once again step into the role, which was actually last played by fill-in Nick Stabile.

On the other hand, GH could go for recast and see what happens. It’s been long enough that viewers would likely accept someone new. We just need some handsome actor who can deliver a solid performance and be believable as Nikolas.

The timing would be excellent since the Ryan Chamberlain (Jon Lindstrom) drama is wrapping up. General Hospital will need some good material for Genie Francis (Laura Webber) soon.

Laura Webber Could Get Her Son Back

Since it appears Sonny Corinthos (Maurice Benard) will get involved in the Dante search, he might play a role in reuniting Laura and Nik.

Giving Laura her son back would mean the world to her. Sonny could give Spencer Cassadine (Nicolas Bechtel) his dad back as well. There’s no guarantee that’s where this hot plot’s headed, but it’s an interesting idea to explore. Many General Hospital fans would love to see Nikolas in Port Charles again!

Do you think the Dante hunt might lead to Nikolas instead? Would you be on board with that twist? We’ll give you updates as other GH news comes in. Stay tuned to the ABC soap and don’t forget to check CDL often for the latest General Hospital spoilers, updates and news.