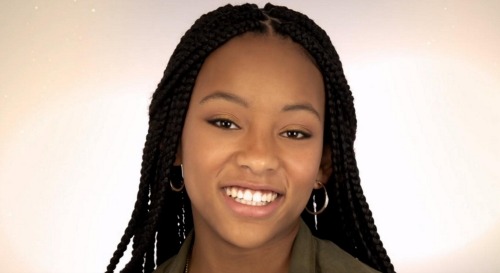 General Hospital (GH) spoilers tease that the ABC soap has big plans for the teen scene. Now that Dev Cerci (Ashton Arbab) is in the mix, new stories are taking shape and that means more airtime. With that in mind, GH recently locked Sydney Mikayla (Trina Robinson) in with a contract. That’s great news for Mikayla as well as this cast of teen characters.

Trina was once an often mentioned but rarely seen troublemaker bestie for Josslyn Jacks (Eden McCoy). However, Trina’s role shifted once Mikayla took over for Tiana Le in February. General Hospital has taken this character in a slightly different direction. Trina doesn’t seem to be quite the wild child she used to be.

Of course, Trina still likes to party! She’s the quintessential friend who’s always up for a good time; there are just fewer threats of arrest now. Perhaps Oscar Nero Quartermaine’s (Garren Stitt) death played a role in settling Trina down somewhat. The same goes for Cameron Webber (William Lipton). These teens have had to grow up fast due to Oscar’s tough battle and the loss that followed.

Speaking of Cameron, Trina just agreed to attend Franco Baldwin (Roger Howarth) and Elizabeth Baldwin’s (Rebecca Herbst) wedding reception with him. Josslyn’s in for a shock when she changes her mind and finds that Trina took her spot. Dev also flirted with Trina, so it was wise for GH to put Mikayla on contract. They can have some fun with this foursome in the months ahead.

General Hospital spoilers say there may be some mixing and matching going on in the love department. If Joss starts falling for Dev, will Trina get together with Cam for a while? They admitted they weren’t into each other during the Niagara Falls trip, but a lot’s changed since then. Now that Trina’s coming through for Cameron and showing how much she cares, their relationship could bloom.

Then again, Trina and Dev could form a stronger connection if Joss and Cam become a couple down the road. GH has options through Mikayla’s contract addition, so it’ll be interesting to see where things go from here. We’ll give you updates as other details emerge. Stay tuned to the ABC soap and don’t forget to check CDL often for the latest General Hospital spoilers, updates and news.