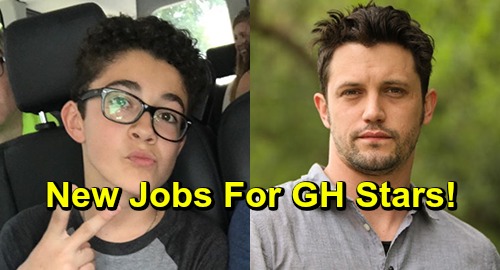 General Hospital (GH) spoilers has some great news to pass on about a new project for a couple of GH stars. Both Nathan Parsons (Ethan Lovett) and Nicolas Bechtel (Spencer Cassadine) have new jobs and have been cast in a movie that is currently filming in Alabama.

The movie is called “I Still Believe” and is a biopic that tells the story of Grammy-nominated singer/songwriter and Christian music superstar Jeremy Camp, who has sold over five million albums worldwide. The movie is named after Jeremy’s hit single, “I Still Believe.”

The film will focus on the development of Jeremy’s phenomenal career and his personal journey as well as the untimely death of his first wife and his relationship with his second wife.

Playing Brothers In The New Film

Nathan and Nicolas will be in good company in the movie. “Riverdale” star K.J. Apta will portray Jeremy Camp in the film, with Gary Sinise portraying Jeremy’s father and Shania Twain portraying his mother.

Both Nathan and Nicolas have done the bulk of their work on TV series and TV movies thus far, and it’s great to see them branch out into a major motion picture.

“I Still Believe” will be distributed by Lionsgate and produced by Jon Erwin, Andrew Erwin, and Kevin Downes, who previously produced the 2018 film “I Can Only Imagine.”

“I Still Believe” is currently planned to be released on March 20, 2020, so GH fans will have something to look forward to next year. Do you plan to see the movie?