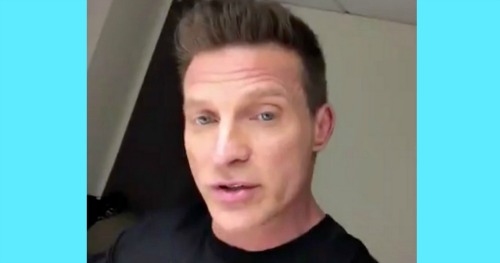 General Hospital (GH) spoilers tease that Steve Burton (Jason Morgan) is saying goodbye to a long-term role. For 17 years, Burton has voiced the character of Cloud Strife in Square Enix’s Final Fantasy VII role-playing video game series. Fans of the game have enjoyed hearing Burton in the part, but the latest remake won’t feature him. Cody Christian will voice the character this time around.

Burton shared the news on his Twitter account by posting a video explanation and some words of gratitude. “There’s been some talk out there that I’m no longer voicing Cloud Strife and that is correct,” Burton said. “Man! Seventeen years! Seventeen years! What a run it’s been, but first I just gotta say how grateful I am to even have had the opportunity to voice such a legendary character.”

Burton went on to talk about how lifechanging the experience was. He was thrilled to have a chance to work with some other excellent voice actors and interact with those who played the series. “To the fans, you guys have been amazing,” Burton said. “Over the 17 years I’ve done it, you’ve shown nothing but love and support…I can’t tell you how much that means to me.”

It turns out Burton wasn’t the only one pushed aside for this remake. This is part of a larger reboot that’s freshening up the series and moving it forward. Burton doesn’t have any hard feelings about that. He gets that changes come along, and you just have to roll with them.

Burton insisted, “Things happen. Doors close. Other doors open. This is a door opening for a new cast of final fantasy. I’m sure they’re gonna be incredible. I know Cody Christian’s gonna give it everything he’s got, so I wish him the best.”

Later, Christian reached out to Burton to thank him for paving the way and making the character who he is. He promised not to let Burton down, so Burton tweeted back how much faith he has in Christian. “You already sound great and I have no doubt you will do an amazing job,” Burton said.

Of course, this is a bummer to fans who preferred Burton in the part, but maybe he’ll have time for other voicework now. Regardless, General Hospital spoilers say Jason will continue to bring drama to Port Charles. At least GH viewers don’t have to worry about that!

Jason and Shiloh Archer’s (Coby Ryan McLaughlin) battle will heat up in the coming weeks, so stay tuned to see just how ugly it gets. We’ll give you updates as other General Hospital details emerge. Stick with ABC’s GH and don’t forget to check CDL often for the latest General Hospital spoilers, updates and news.

You may have heard, I will no longer be voicing the amazing cloud strife. Much luv & respect to @SquareEnix for the opportunity.. forever GRATEFUL! And so grateful to all of the FANS..thank you so much for the ♥️ & support. My best to @ReallyCody I’m sure he will do a great job! pic.twitter.com/823Ls8jx0C