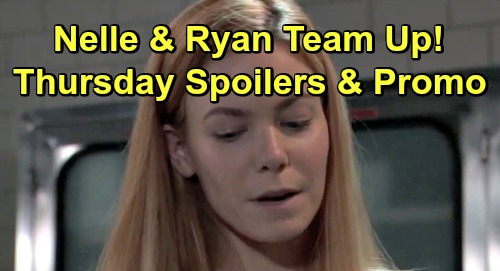 General Hospital (GH) spoilers for Thursday, June 13, tease that Ava Jerome (Maura West) will stand her ground. She’ll be enjoying a cocktail at the Metro Court when someone joins her. Ava will snap at this person to take her as she is, so it seems Jasper “Jax” Jacks (Ingo Rademacher) will listen to Nina Reeves (Michelle Stafford). It looks like Jax will try to undo the damage he caused on Wednesday.

Nina had Ava right where she wanted her, but Jax blew the deal by riling Ava up. Ava intends to tell her story on her own terms, so Jax may reluctantly let her have her way. Later, it appears Carly Corinthos (Laura Wright) will get updates on Ava’s cover story gig. She’ll rant about Ava still walking around while her son is dead, so she may think Jax should’ve rejected Nina’s plan.

Jax will understand why Carly will always hold a grudge over Morgan Corinthos (Bryan Craig), but business is business. It’d best not to rock the boat with Nina if he can help it – especially since Jax clearly has a crush on her. Meanwhile, Shiloh Archer (Coby Ryan McLaughlin) will visit Harmony Miller (Inga Cadranel), who was arrested for his crimes. He’ll insist that the most important thing is finding his son.

It’s not clear what Shiloh expects Harmony to do now that she’s locked up, but he’ll rant anyway. Perhaps Shiloh will ask Harmony to recap her conversation with Willow Tait (Katelyn MacMullen) and try to find any little clue that might help.

Elsewhere, Willow will get some reassurance from Michael Corinthos (Chad Duell). It sounds like Michael will walk Willow through some worst-case scenarios and try to make her see that things aren’t as bad as they seem. Michael will point out that the first thing Shiloh would do is prove Willow had a baby. He may contend that if Shiloh pulls that off, there’s still no way for him to connect the other dots.

Of course, GH fans know Shiloh has already proved Willow had a son. We have no doubt that Shiloh will discover that Lucas Jones (Ryan Carnes) and Brad Cooper (Parry Shen) adopted his child. It’s just a matter of when and what he’ll do when he finds out!

That’s why Sonny Corinthos (Maurice Benard) will consider his next move carefully. He ordered Jason Morgan (Steve Burton) to hold off on killing Shiloh, but that doesn’t mean he’s completely abandoned the idea. Sonny will tell Brad that he’s not going to let anything happen to that little boy. He may admit he’s willing to take deadly action if comes to that.

Julian Jerome (William deVry) will contend that he’s in if Sonny’s going to eliminate Shiloh. He won’t have any qualms about taking this menace off the streets. In Pentonville, Nelle Benson (Chloe Lanier) will welcome Ryan Chamberlain (Jon Lindstrom) and speak to him in the infirmary. Her prison job will lead to an unusual friendship.

Nelle will connect with Ryan, which is reasonable since they’re both killers who had their kidneys stolen. He told Dr. Hamilton Finn (Michael Easton) that no prison could hold him and vowed to get out one day. One day could come sooner than Ryan ever expected! We know Nelle will make an escape by the end of the week, so she may team up with Ryan to make that happen.

Finally, General Hospital spoilers say Sonny will make a shocking discovery. He’ll spot Lulu Falconeri (Emme Rylan) on a hot date, so he’ll definitely wonder what’s up. Naturally, this will just be part of the story she’s working on. Lulu could face some tense moments with Sonny before she can clear up the confusion!