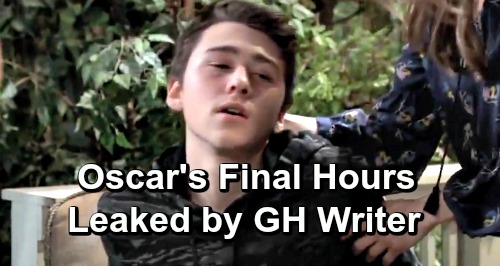 General Hospital (GH) spoilers tease that Oscar Nero (Garren Stitt) – or Oscar Nero Quartermaine now that he’s honoring his family legacy – will near the end of his life. It’s a day his friends and family have been trying to prepare for, but they haven’t succeeded. How do you really prepare for something like that? All they can do is brace for the blow and the heartache losing Oscar will leave them with.

GH has a special episode coming up, which will serve as a farewell to Oscar. On May 1, Oscar’s loved ones will come to grips with his imminent death. The moments leading up to that are sure to be excruciating, but the ones that follow will be even worse. Nevertheless, this is happening and there’s no getting around that. As Oscar fades, everyone will have to face the facts.

Shelly Altman, one of General Hospital’s co-head writers, described what’s ahead in an interview with Soap Opera Digest. She noted that this loss will be rough on Drew Cain (Billy Miller) and especially Dr. Kim Nero (Tamara Braun). The pain of losing a child is something no parent should ever have to go through.

“Drew does his best to be a source of support to an emotionally fragile Kim,” Altman said. “Oscar has been her world for the past 16 years. So for Kim, she sees her world crumbling.” Of course, Drew will have a different problem to work through.

Kim built her life around Oscar, but Drew barely even had a chance to know him. He’ll desperately wish he could have more time with his son.

Josslyn Jacks (Eden McCoy) will certainly be a mess as Oscar’s demise rapidly approaches. “Josslyn refuses to leave Oscar’s side,” Altman said. “Despite the certainty that Oscar is facing his final days, if not hours, she can’t help but hold onto a last gasp of hope.”

Unfortunately, hope won’t be enough to save Oscar from a grim fate. Joss will have to let go along with the rest of the people near and dear to Oscar. GH fans can expect some devastating scenes, but General Hospital spoilers say they’ll bring some powerful performances.

GH will deliver a truly fitting sendoff for Oscar as he passes away. We’ll give you updates as other news comes in. Stay tuned to the ABC soap and don’t forget to check CDL often for the latest General Hospital spoilers, updates and news.