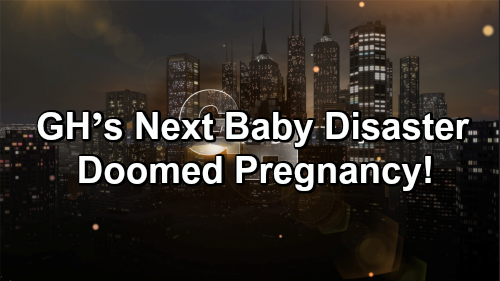 General Hospital (GH) spoilers tease that one couple’s good news could turn to total heartbreak. When a happy duo gets pregnant, it’s always a fun time for GH fans. Soap babies are adorable to watch and can be entertaining in hot storylines. “Wiley” Cooper-Jones aka Jonah Corinthos is at the center of a big baby swap story, which will definitely heat up in the coming weeks.

However, General Hospital spoilers say another baby plot’s about to kick off. This one could potentially end in disaster! Valentine’s Day will bring a wonderful announcement, but is this just setting the stage for major trouble? After all, a serial killer is still on the loose.

Jordan Ashford (Briana Nicole Henry) is still in the running for the pregnant mom-to-be, so she’d be an easy target for Ryan Chamberlain (Jon Lindstrom). If Jordan figures out the truth and doesn’t have a chance to tell anyone else, Ryan may take action and put her possible baby in jeopardy. If not, there are a thousand other things that could go wrong in Jordan’s dangerous line of work.

Of course, Olivia Quartermaine (Lisa LoCicero) is another pregnancy option that’s been tossed around. There have also been online rumblings about Olivia potentially facing an attack, although there haven’t been any strong hints on screen just yet. Still, Ava Jerome (Maura West) did go to Olivia and beg for her to try having some sort of premonition.

Ava’s desperate to predict the killer’s next move so she can figure out where he’s been. She has to know who killed Kiki Jerome (Hayley Erin). That at least raises the possibility that Olivia’s premonitions will return and spell trouble. Regardless, the woman who’s pregnant may not actually get a baby out of this.

Maxie West (Kirsten Storms) endured a rough delivery, but little James West was just fine. Although Michael Corinthos (Chad Duell) currently believes his son is dead, we also know Nelle Benson (Chloe Lanier) gave birth to a healthy child. The last onscreen pregnancies ended well, so the next one could have disastrous results.

GH may want to mix it up with some intense heartache this time, especially if they want to drive the pregnant couple apart. Could a miscarriage lead to a split for one duo? General Hospital spoilers say some gripping drama’s on the way, so stay tuned. We’ll give you updates as other details emerge. Stick with the ABC soap and don’t forget to check CDL often for the latest General Hospital spoilers, updates and news.