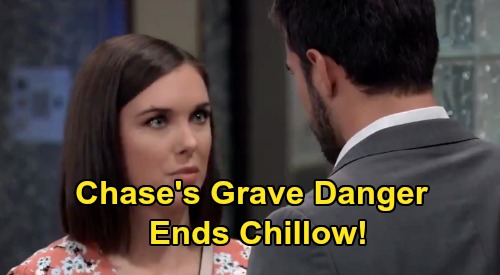 General Hospital (GH) spoilers reveal that Lulu Falconeri’s (Emme Rylan) warning will bring drama for Willow Tait (Katelyn MacMullen) and Harrison Chase (Josh Swickard). During Lulu’s recent chat with Willow, she filled her in on the complications of dating a cop. Lulu suggested that there’s obviously a certain need to protect and serve, but there’s also an element of righteousness. There’s something that drives them to go above and beyond – often to the point of putting themselves in grave danger.

We already saw the first signs of trouble thanks to Lulu’s warning. Chase was supposed to meet up with Willow, but he ultimately got stuck dealing with work. He texted Willow about getting caught up in police business and added that he was at the hospital. Willow flew into a panic thinking Chase might be injured, even though the text was innocent and showed no hint of any danger for her beau.

Chase offered reassurance and seemed amused by Willow’s protective side, but it won’t be so funny when real peril hits! We’re assuming that it indeed will based on Lulu’s ominous comments. Dating a cop isn’t for everyone. Willow finally escaped Dawn of Day and that drama-filled cult life with Shiloh Archer (Coby Ryan McLaughlin). She may have reservations about signing up for this kind of stress with Chase.

If Willow was that worried over some text confusion, just imagine how upset she’d be over Chase getting shot or caught up in a hostage crisis. Shiloh could even target Chase at some point to get to Willow. It’s doubtful prison walls can hold Shiloh. He seems destined for a deadly fate, but not before he causes a bit more chaos. Willow will undoubtedly be part of that chaos down the road.

As for Chase and Willow’s relationship, GH fans will definitely see more issues soon enough. During the week of August 12-16, General Hospital spoilers say a different side of Chase will catch Willow off guard. Now that she’s heard Lulu’s advice, she may not be able to get it out of her head. It could open Willow’s eyes to the limits Chase tests and the risks he takes daily. Willow may pipe up when Chase does something that could put his life at stake.

Could this drive Willow toward Michael Corinthos (Chad Duell) eventually? Michael’s got a much safer job – although his family’s certainly dangerous. Having a mob boss for a dad isn’t exactly safe, but at least Sonny’s the one with most of the power around town. Plus, it’s not the same as wondering if your significant other is going to come home every day. That may be tough for Willow to accept moving forward.

Willow may begin to lean on Michael about this topic, which could strengthen their bond even further. Do you think General Hospital is gearing up for a Michael and Willow romance? We’ll give you updates as other GH news comes in. Stay tuned to the ABC soap and don’t forget to check CDL often for the latest General Hospital spoilers, updates and news.