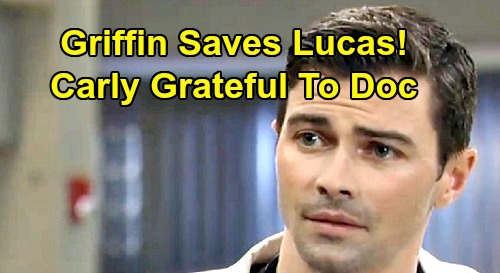 General Hospital (GH) spoilers tease that a big return’s on the way. Dr. Griffin Munro is headed back to Port Charles with an important goal in mind. GH fans know Lucas Jones (Ryan Carnes) was injured in a horrific car accident, which left him with swelling of the brain. His doctors won’t know the extent of the damage until Lucas takes some time to heal in a medically induced coma.

However, Carly Corinthos (Laura Wright) will want to be sure Lucas has all the help he needs. Griffin really knows his stuff, so Carly will call him up and ask him to come serve as a specialist in Lucas’ case. General Hospital spoilers say Griffin will soon make the trip to PC, where he’ll get to work ASAP. He’ll undoubtedly assure Carly, Bobbie Jones (Jacklyn Zeman), Brad Cooper (Parry Shen) and Julian Jerome (William deVry) that he’ll do everything he can.

Carly’s hoping Lucas will be out of his coma by Christmas, and that seems like a nice goal for GH to shoot for. After all, soaps have to have their annual holiday miracles! Lucas may be the recipient of one this year – and perhaps Brad could get one of his own. It seems likely Lucas will have some memory loss due to the crash. That’s probably the whole point of giving Lucas a brain injury.

Lucas may remember Brad, “Wiley Cooper-Jones” (Erik and Theo Olson) and their life together, but what about Brad’s confession just before the accident? That part Lucas may draw a blank on! It makes sense to have Lucas forget Brad’s admission – at least for a while. There’s a chance Lucas will have total recall later, but this also presents the opportunity for the truth to come out another way.

Regardless, Griffin will probably warn Lucas to take it easy and try not to push himself. Lucas might feel like he forgot something important, but Brad would certainly want him to let that go! These two have a real shot at getting back on track after Lucas awakens. Near-death experiences tend to bring feuding couples together, so Brad and Lucas may put the past behind them at first.

Naturally, the baby swap truth is bound to come out anyway! If Lucas wakes up with memory loss around Christmas, perhaps the big reveal will happen during February sweeps. As for Griffin, he’ll put his knowledge to good use and give Lucas back to his family. General Hospital spoilers suggest Griffin will also share scenes with Ava Jerome (Maura West), and we’re betting an Anna Devane (Finola Hughes) visit is in order, too.

Are you looking forward to seeing Dr. Griffin Munro again? We’ll give you updates as other GH news comes in. Stay tuned to the ABC soap and don’t forget to check CDL often for the latest General Hospital spoilers, updates and news.