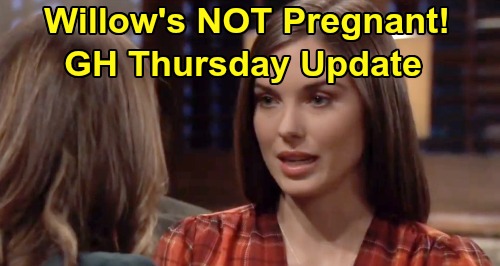 General Hospital (GH) spoilers update for Thursday, December 5, teases that Jasper “Jax” Jacks (Ingo Rademacher) will once again be infuriated by his partner in crime. He’ll be floored and furious over Nikolas Cassadine’s (Marcus Coloma) staged attack on Hayden Barnes (Rebecca Budig). Jax will defend his decision to drive Hayden out of town, but Jax will think it’s just another one of Nik’s terrible choices.

Unfortunately, Nikolas made another bad call at Shadybrook. He convinced a nurse to give Ava Jerome (Maura West) the drugs he wanted and then made an appalling scene, which included manipulating Ava with her daughter’s memory. There’s apparently no line Nik won’t cross in his quest for the codicil!

Nikolas told Ava that Kiki was in hell with him and pushed for the scoop on the portrait. Ava revealed it was at the gallery in hopes of helping Nik and Kiki’s souls rest. What Nik doesn’t know is that his Cassadine ring slipped off and wound up under Ava’s bed.

Nina Reeves (Cynthia Watros) will arrive to find Ava deeply disturbed by the whole ordeal. She’ll get on the floor with Ava, who’ll cry and babble on about Kiki suffering in hell because of her. Nina won’t understand what put that idea in Ava’s head. He’ll urge Ava to reveal who told her that, but Ava may be hesitant to reveal it was Nikolas. He asked Ava to keep their conversation a secret, so she may be wary of betraying him again.

However, Ava will be in pretty bad shape. It’s not unreasonable to think she might blurt out Nikolas’ name, but it may not matter if Nina finds that Cassadine ring – and we’re betting she will. There has to be a reason GH sent Nina to Shadybrook right after Nik dropped the ring. This could give Jax yet another reason to blast Nikolas eventually.

In the meantime, Martin Gray (Michael E. Knight) and Valentin Cassadine (James Patrick Stuart) will break in Ava’s gallery. They’ll hope to swipe the portrait and get out of there just as fast, so we’ll see how their plan works out. Over with Michael Corinthos (Chad Duell), he’ll talk to Harrison Chase (Josh Swickard) about the awful car crash. Michael will quickly realize Chase thinks someone may have caused the accident on purpose.

Julian Jerome (William deVry) didn’t pretend to care about Brad’s injuries during his recent chat with Chase. It seems likely Chase will focus on Julian as a suspect soon enough. As for Willow Tait (Katelyn MacMullen), she’ll get grilled about her pregnancy test results once more. Sasha Gilmore (Sofia Mattsson) will be eager to find out what the test said, so Willow will finally reveal whether she’s got a bun in the oven.

General Hospital spoilers suggest Willow may end up battling disappointment. She hinted she might be if she wasn’t pregnant – and it doesn’t look like she is based on the latest news from GH insiders. There’s been some conflicting info making the rounds, but things have shifted and now it certainly appears there’s no baby on the way.

Other General Hospital spoilers say Brad Cooper (Parry Shen) will battle guilt at GH. He’ll be a mess as he tells Carly Corinthos (Laura Wright), Sonny Corinthos (Maurice Benard) and Epiphany Johnson (Sonya Eddy) that this is all his fault. Sonny will grow curious over that comment, but Brad will probably argue that their relationship struggles put them on the path to disaster. Since he’s to blame for those struggles, Brad can argue that’s why he feels responsible.

In reality, Brad may fear that blurting out the “Wiley Cooper-Jones” (Erik and Theo Olson) contributed to the accident. Lucas Jones (Ryan Carnes) still wouldn’t have been able to brake, but the shocker couldn’t have helped! It’s hard to focus on the road when you’ve just been told your adopted son was stolen.

Nevertheless, Julian is really the one to blame here. He should’ve known his plot could end in catastrophe for more than just Brad. Julian will likely hope he’s covered his tracks well enough to keep himself out of prison. Speaking of prison, Nelle Benson (Chloe Lanier) will catch up with her new cellmate on Thursday. She’ll needle Sam McCall (Kelly Monaco), who definitely won’t be happy about sharing a cell with Nelle.

As for Carly, she’ll reach out to a specialist by the end of the week. General Hospital insiders insist that Dr. Griffin Munro (Matt Cohen) is making a comeback, so let’s hope he’ll help Lucas pull through by Christmas. We’ll give you updates as other GH details emerge. Stick with the ABC soap and don’t forget to check CDL often for the latest General Hospital spoilers, updates and news.