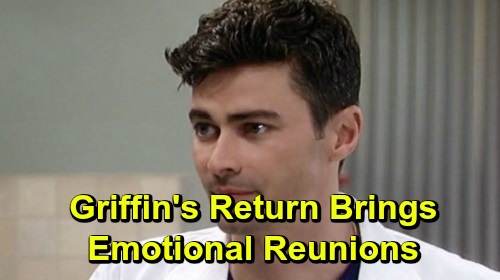 General Hospital (GH) spoilers tease that Dr. Griffin Munro (Matt Cohen) will be back on the scene soon according to reliable insiders. Carly Corinthos (Laura Wright) will be deeply distraught after Lucas Jones (Ryan Carnes) ends up in a coma and on life support. His car crash will leave him in need of a specialist, and Carly will think she knows just the doc for the job!

GH buzz suggests Carly will call up Griffin and beg him to return to Port Charles. She’ll make an emotional plea and hope that Griffin can bring Lucas back to them. Griffin surely won’t be able to turn Carly down! He can’t guarantee that he’ll be able to help Lucas overcome his struggles and come out of his coma, but he can certainly give it his best shot.

There’s no word yet on how long Griffin might be sticking around, but it should at least be a nice little arc. After all, Griffin can’t just fix Lucas up overnight. He’ll need some time to run tests and figure out the best way to handle everything.

Plus, Lucas now knows the truth about “Wiley Cooper-Jones” (Erik and Theo Olson). General Hospital wouldn’t be bothering with this coma if they didn’t want that secret kept under wraps for a bit. Lucas should pull through and emerge from his coma eventually, but Griffin will have to put some work into this first.

That should give Griffin a chance to reconnect with several Port Charles residents. For starters, there’s Anna Devane (Finola Hughes). GH fans know she recently returned to PC and has a special bond with the sweet, handsome former priest.

Anna will inevitably catch up with Griffin and could perhaps lean on him for support after Peter August’s (Wes Ramsey) sinister secrets come out. They’ve been known to confide in each other in the past, so Griffin would gladly lend a sympathetic ear.

Griffin could also run pay Ava Jerome (Maura West) a visit at Shadybrook and extend his support. He was angry over Kiki Jerome’s (Hayley Erin) death when he left town, and it had left him a bitter man. It seems likely Griffin did some soul-searching and mellowed a bit since then. Even so, the experience of losing Kiki changed him. Griffin can undoubtedly understand that it changed Ava, too.

This would be a great opportunity for some meaningful Griffin and Ava scenes. As for the main reason for Griffin’s comeback, we all know he’s a miracle worker! Will Griffin bring Lucas back to his family for Christmas?