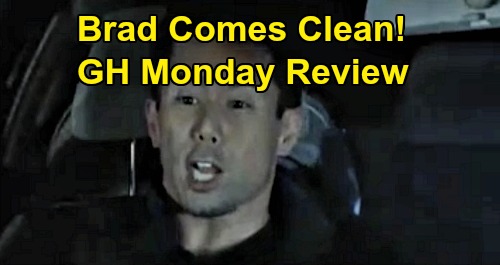 General Hospital (GH) spoilers review for Monday, December 2, reveal that Kendra Lennon (Michelle Argryis) drove an unconscious Alexis Davis (Nancy Lee Grahn) to a remote location and injected her with something, which caused Alexis to wake suddenly. As it turns out, Kendra had given Alexis a paralytic so she couldn’t move a muscle, and as Alexis sat there helplessly, Kendra went on about Kiefer Bauer (Christian Alexander) and how he didn’t deserve to die.

Kendra then dragged Alexis out of the back of the car and put her in the middle of the road. She explained to a horrified Alexis that she had received a call from Shiloh Archer (Coby Ryan McLaughlin) saying that Alexis had run Kiefer down on purpose, and that Kristina Corinthos-Davis (Lexie Ainsworth) knew all about it. Kendra ominously told Alexis that when she saw those headlights coming toward her, she’d know how Kiefer felt.

Meanwhile, Brad Cooper (Parry Shen) and Lucas Jones (Ryan Carnes) argued at their place. Brad tried to tell Lucas that he wasn’t cheating, but Lucas insisted that Brad tell him what he’s been hiding. Brad came close to blurting out the truth when Lucas implored him to tell the truth for Wiley Cooper-Jones’ (Theo and Erik Olson) sake, but at that moment Carly Corinthos (Laura Wright) called and asked Lucas to come over for Thanksgiving. Lucas agreed, and he and Brad hopped in Brad’s car, with Lucas driving.

The men continued their argument in the car, and Lucas again begged Brad to tell him what happened to cause the big change in him. Lucas noted that Brad started acting differently when Wiley came into the picture and assumed that maybe Brad didn’t want Wiley. But Brad said that he wanted Wiley too much, which confused Lucas.

Brad then proceeded to tell Lucas that Wiley isn’t the baby they adopted and that he was Michael Corinthos (Chad Duell) and Nelle Benson’s (Chloe Lanier) son. Lucas was aghast, and just then they came upon Kendra’s car in the middle of the road, where she was preparing to run over Alexis. Lucas pushed on the breaks, which wouldn’t work, and Brad screamed at Lucas to look out as Lucas tried to swerve and crashed the car.

Finally, the Quartermaine Thanksgiving drama got underway, as Brook Lynn Ashton (Amanda Setton) caused trouble. First, she griped about Olivia Quartermaine’s (Lisa LoCicero) decorations and irritated Monica Quartermaine (Leslie Charleson), who later told Ned Quartermaine (Wally Kurth) that Brook Lynn was just like her grandmother and must have come to Port Charles with an agenda.

Later, Lulu Spencer (Emme Rylan) and Rocco Falconeri (O’Neill Monahan) arrived at the mansion, and Brook Lynn immediately started getting her digs in. When Rocco mentioned Dustin Phillips (Mark Lawson), Brook Lynn took notice and later needled Lulu for dating so quickly after divorcing Dante Falconeri (Dominick Zamprogna). Lulu quickly pointed out that Dante had divorced her and that he abandoned her – something that Olivia overheard and didn’t like.

But everyone seemed to recover, and they forged ahead toward their Thanksgiving meal. But later, Olivia was horrified to find the Thanksgiving food stolen, and as it turned out Monica had arranged to secretly donate all the food to the hospital with Epiphany Johnson’s (Sonya Eddy) help. That left the Quartermaines stuck with pizza for Thanksgiving once again, and no one the wiser that Monica was behind the whole thing.