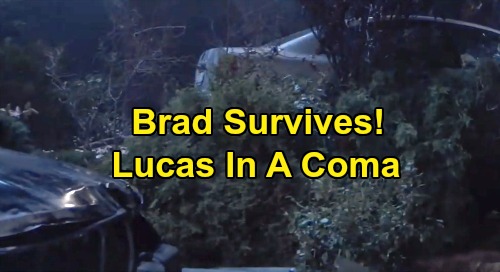 General Hospital (GH) spoilers tease that devastation is coming up for Julian Jerome (William deVry). He’ll be crushed when he realizes Lucas Jones (Ryan Carnes) was caught in the crash meant for Brad Cooper (Parry Shen), but this is a good twist of fate for Alexis Davis (Nancy Lee Grahn). Julian inadvertently saved Alexis’ life by cutting the brakes on Brad’s vehicle.

Since Lucas couldn’t stop the car, we saw that it was about to plow into Kendra Lennon’s (Michelle Argyris) SUV and keep her from running over Alexis at full speed. That doesn’t mean Alexis won’t potentially be injured by an out-of-control vehicle, but it does mean her life will be spared thanks to Julian. Unfortunately, Lucas won’t fare as well in the aftermath. General Hospital spoilers suggest Lucas will wind up in a coma after this terrible nightmare unfolds.

Bobbie Jones (Jacklyn Zeman) will deliver some truly awful news this week – and it seems likely it’ll be about Lucas. GH buzz hints that Lucas will be on life support, which will delay the big reveal. Brad Cooper (Parry Shen) just told Lucas that “Wiley Cooper-Jones” (Erik and Theo Olson) is Michael Corinthos (Chad Duell) and Nelle Benson’s (Chloe Lanier) son, but Lucas’ coma should prevent him from revealing the truth.

Other General Hospital spoilers say Carly Corinthos (Laura Wright) will be desperate to help, so she’ll decide to call in a specialist. Some reliable GH insiders insist that specialist will be Dr. Griffin Munro (Matt Cohen)! They claim Griffin will be making a comeback in hopes of saving Lucas, and that seems reasonable based on all the available info.

As for Brad, there’s been a bit of a social media debate thanks to Parry Shen’s Facebook post. He made a statement that suggested he was leaving General Hospital, but that doesn’t seem to be the case. Shen followed up with a comment that hinted he was joking – and most GH fans know he has a quirky sense of humor!

The same reliable insiders say Brad sticks around, which is great if you enjoy having another schemer in Port Charles. As an Asian gay character, Brad is also crucial for representation. It would’ve been a shame to kill Brad off, so it’s a relief that his exit doesn’t seem to be happening after all.

Of course, that means Brad will have to face the music eventually. Brad should be terrified of losing Lucas, but he should also be terrified about what’ll happen when Lucas wakes up! General Hospital spoilers say some hot drama’s ahead, so don’t miss what’s in store. We’ll give you updates as other GH details emerge. Stay tuned to the ABC soap and don’t forget to check CDL often for the latest General Hospital spoilers, updates and news.