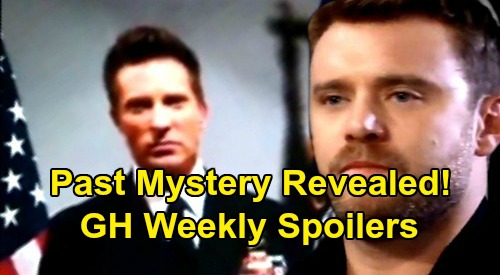 General Hospital (GH) spoilers for the week of July 29 to August 2 tease that some hot drama’s ahead. First, Michael Corinthos (Chad Duell) will mull over Nelle Benson’s (Chloe Lanier) veiled comment about their son. He’ll have Jonah Corinthos on his mind, so he’ll decide to open up to Sasha Gilmore (Sofia Mattsson). It looks like Michael will tell Sasha the whole ugly story about his history with Nelle and their “dead” baby.

Over with Drew Cain (Billy Miller), he’ll ponder a mystery box. Someone will send Drew a memento from the past, so he’ll grow curious who’s behind this and what it means. Will it be Shiloh Archer (Coby Ryan McLaughlin) messing with Drew? Regardless, this will unlock a new chapter in Drew’s shocking story.

Meanwhile, Jason Morgan (Steve Burton) will battle Shiloh’s concerns. Shiloh will be far too cocky for Jason’s taste. He’ll fear Shiloh’s got some dirty tricks up his sleeve, so he’ll grow increasingly determined to protect his loved ones.

Other General Hospital spoilers say Nina Reeves (Cynthia Watros) and Valentin Cassadine (James Patrick Stuart) will host dinner at Wyndemere. Jasper “Jax” Jacks (Ingo Rademacher) will have a chance to snoop around and hopefully uncover something that could help with Valentin’s takedown.

Back with Michael and Sasha, GH fans can expect them to chill out on island time. It sounds like their delayed trip to Puerto Rico will finally pan out. Of course, there are always surprises waiting just around the corner. General Hospital spoilers say Sasha and Michael’s plans will take an interesting turn, so don’t miss the shockers headed their way.

Elsewhere, Sam McCall (Kelly Monaco) will have a meeting with Willow Tait (Katelyn MacMullen). They’ll undoubtedly discuss Shiloh and any lingering threat he might pose. Willow and Sam will hope justice will prevail, but Shiloh’s proven he knows how to wiggle out of trouble. They’ll fret about what Shiloh might pull before he has a chance to be convicted as well.

Later, Alexis Davis (Nancy Lee Grahn) will deliver terrible news to someone. Will it be about Shiloh? It seems like he’s involved in all her terrible news lately, so there’s a good possibility it’ll be the case this time, too. Next, Kim Nero (Tamara Braun) will make a stunning confession. Curtis Ashford’s (Donnell Turner) been puzzled about Drew’s near rape on The Haunted Star, so that may be what Kim comes clean about.

Drew will chat with Curtis that same day, so they might talk about Kim’s grief. Curtis may understand why Drew didn’t want to press charges since Kim’s already been through so much. Finally, General Hospital spoilers say Franco Baldwin (Roger Howarth) and Cameron Webber (William Lipton) will bond. They’ll truly start forming a connection, which should thrill Elizabeth Baldwin (Rebecca Herbst).

It sounds like some fantastic episodes are coming up. We’ll give you updates as other GH details emerge. Stay tuned to the ABC soap and don’t forget to check CDL often for the latest General Hospital spoilers, updates and news.