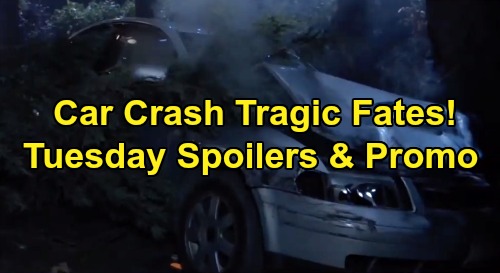 Of course, Kendra Lennon (Michelle Argyris) was all set to run over a temporarily paralyzed Alexis Davis (Nancy Lee Grahn), so she backed up to carry out her vengeful plan. These cars were on a collision course in Monday’s cliffhanger, which means we’ll see the aftermath on Tuesday. The vehicle containing Lucas and Brad will be banged up along with the one containing Kendra.

General Hospital spoilers reveal that Brad’s exit may be coming up, so a deadly outcome could be looming his character. As for Lucas, a coma could be a good option to preserve the “Wiley” big reveal a bit longer. Kendra’s fate is still up in the air, but death or prison are pretty much the only two possibilities. This revenge arc is over, so there’s no need to keep Kendra around.

That brings us to Alexis. Kristina Corinthos-Davis (Nancy Lee Grahn) will ask about her mom when she arrives at GH later. Will Alexis still be hurt in the crash aftermath? She’ll be helpless and quite close to moving vehicles, so we can’t rule it out. However, it’s also possible Alexis will merely be treated for her head wound and spend some time recovering from that temporary paralysis drug.

For the time being, Kristina will likely hear about Kendra’s connection to Kiefer Bauer (Christian Alexander) and fear the worst. She’ll battle guilt whenever she realizes her confession to Shiloh Archer (Coby Ryan McLaughlin) set all this in motion. Julian also has a crushing discovery headed his way when he learns his decision to kill Brad had unanticipated consequences.

On a lighter note, Curtis Ashford (Donnell Turner) and Jordan Ashford (Briana Nicole Henry) will celebrate their anniversary. They’ll enjoy some steamy moments in the bedroom until Jordan gets called out to the scene of the accident. Over with Carly Corinthos (Laura Wright), she’ll warn someone that Sonny Corinthos (Maurice Benard) “can do all that to you and more.” She’ll definitely have concerns, so maybe she’ll push Jasper “Jax” Jacks (Ingo Rademacher) to keep his guard up.

It looks like Sonny will try to trick Jax in Tuesday’s episode. He’ll insist Jax doesn’t have to pretend since Carly told him the whole story. Jax may be fooled initially, but it shouldn’t take him long to realize Sonny’s bluffing – or was at least given a bogus version of events. Sonny doesn’t know Nikolas Cassadine (Marcus Coloma) is alive, and it’s doubtful he’ll find out just yet.

Other General Hospital spoilers say Sasha Gilmore (Sofia Mattsson) will give Willow Tait (Katelyn MacMullen) some support. She’ll suggest there’s only one way to know for sure if Willow’s pregnant. Willow will be afraid of a what a pregnancy test might reveal, but she’ll also be eager to find out the truth. She’ll get confirmation on her bun in the oven soon, so that’ll bring a whole new set of challenges.