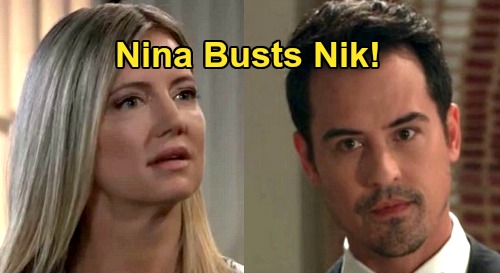 General Hospital (GH) spoilers tease that Nina Reeves (Cynthia Watros) will get some information that leaves her horrified. She’ll face this shocker on December 13, which is the same day Charlotte Cassadine (Scarlett Fernandez) will get hostile. What will have Nina feeling so dismayed and Charlotte feeling so antagonistic? We can certainly think of something…or someone!

GH fans know Charlotte saw Nikolas Cassadine (Marcus Coloma) down on the pier after her kidnapping. She mentioned the incident to Laura Webber (Genie Francis), but she didn’t recognize the mystery man. Charlotte later had a run-in with Nikolas as Wyndemere, where Nik came up with a story to keep the kid quiet. He led Charlotte to believe he was her secret bodyguard and convinced her it should remain under wraps.

There was a moment recently when Charlotte seemed to consider bringing it up to Valentin Cassadine (James Patrick Stuart), but she ultimately stayed tight-lipped. Charlotte suggested she wasn’t scared anymore since she knew Valentin would protect her – and we know she believes he’s doing it through Nik.

In reality, Charlotte’s helping her papa’s enemy! That’s definitely news that could leave her confrontational when it comes out. Charlotte saw Nikolas’ picture on Lulu Spencer’s (Emme Rylan) phone in one of her latest scenes. The wheels may already be turning for Charlotte, so the week of December 9-13 would be a good time to move this plot along.

It’s possible Charlotte will end up mentioning her secret bodyguard to Nina. She could also mention the fact that he’s in one of the pics on Lulu’s phone. That could lead Nina’s own wheels to start turning! Will learning Nikolas is alive leave Nina aghast? Will she realize Nik is plotting against Valentin and has gotten close enough to mess with Charlotte?

Nina has been torn about whether to continue her revenge plot or just enjoy her family. This whole Nikolas thing may be what convinces her to stand by Valentin for good! General Hospital spoilers say Nina’s potential discovery could create plenty of problems for Nik. Will Nina be to blame for blowing Nikolas’ scheme and preventing him from reclaiming the Cassadine fortune?

General Hospital spoilers say Nina will prove she’s a force to be reckoned with in the coming weeks. It sounds like Nina could be the reason Nikolas’ secret gets unleashed on Port Charles – when she’s ready of course! We’ll give you updates as other GH details emerge. Stay tuned to the ABC soap and don’t forget to check CDL often for the latest General Hospital spoilers, updates and news.