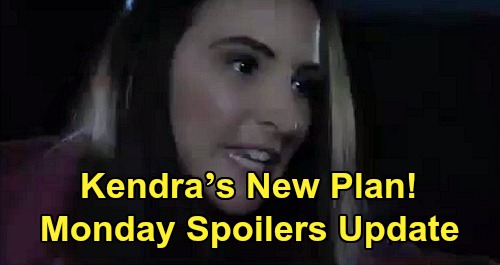 General Hospital (GH) spoilers update for Monday, December 2, teases that Julian Jerome (William deVry) and Neil Byrne (Joe Flanigan) will try to solve the rest of the puzzle. Things are clicking into place when it comes to Kendra Lennon (Michelle Argyris), but there’s one part of the story that’ll baffle them. Julian just won’t understand why Kendra would target Alexis. Neil may agree there’s no obvious motive, but that’s why they need to dig a little deeper.

Meanwhile, Alexis will find herself in serious trouble. Kendra just hit Alexis with a rock in the cemetery, but this phase of her revenge plot is just getting started. It looks like Kendra will get Alexis into a car and prepare for her final act. Kendra will insist that Kiefer Bauer (Christian Alexander) didn’t deserve to die. She might bring up the info Shiloh Archer (Coby Ryan McLaughlin) gave her and argue that she has to make Kiefer’s murderer pay.

Alexis may point out that Shiloh was a manipulative man who used Kendra’s pain to further his agenda. She didn’t mean to kill Kiefer, but Kristina Corinthos-Davis (Lexi Ainsworth) lied in her confession and gave Shiloh some ammo. However, Kendra isn’t a reasonable gal and surely won’t buy a word out of Alexis’ mouth. She may plan to ditch Alexis on the road so she can suffer the same fate as Kiefer.

Regardless, one or both of them could end up in the path of a runaway car. Julian tampered with Brad Cooper’s (Parry Shen) vehicle, but he’s not counting on Lucas Jones (Ryan Carnes) getting inside it with him. Unfortunately, it appears that’s what’ll happen soon enough.

At home, GH spoilers say Lucas will keep pushing Brad to tell him his secret. They’ll eventually move this argument to the car, where Lucas will once again demand the truth. It seems likely Lucas won’t be able to brake as a result of Julian’s actions. That could lead to Lucas running over Alexis or perhaps crashing into the car that contains them both.

Of course, it’ll still be Thanksgiving in Port Charles, so there’ll be some gatherings going on. At the Quartermaine bash, Olivia Quartermaine (Lisa LoCicero) will do something that leaves Monica Quartermaine (Leslie Charleson) appalled. Monica will wonder if Olivia’s really lost it, but what will they be bickering about?

It might relate to “Drew Cain” aka Franco Baldwin (Roger Howarth), who plans to stop by for a bit. This is Monica’s last chance to bond with “Drew,” so she won’t appreciate it if Olivia’s rude. Nevertheless, Olivia may be like many viewers and acknowledge that this isn’t truly “Drew.” Maybe Monica has simply been using “Drew” as a way to avoid dealing with her grief. The real Drew Cain’s (Billy Miller) presumed death is something Monica needs to reflect on and accept.

Over with Brook Lynn Ashton (Amanda Setton), she’ll face Lulu Spencer’s (Emme Rylan) fierce fury. Lulu and Brook Lynn will wind up clashing over Dante Falconeri (Dominic Zamprogna), so the claws will come out. Lulu won’t stand for Brook Lynn acting like she’s anything less than a heartbroken wife who was forced to move on. She’ll shout that Dante abandoned her and most likely push Brook Lynn to worry about her own issues. Brook Lynn’s no doubt got plenty of them since she returned home suddenly and hasn’t divulged why.

Next, General Hospital spoilers say Maxie Jones (Kirsten Storms) will hope to help Peter August (Wes Ramsey). She’ll mention that Peter was uncomfortable during his conversation earlier, and she’ll think she knows why. Maxie will come up with some excuse for why Andre Maddox (Anthony Montgomery) and the memory reversal procedure updates unsettled Peter. She may think it reminded Peter of the past and all his mistakes, but she’ll make it clear that she loves him for who he is now.

Sadly, Peter isn’t the good guy Maxie believes him to be. He’ll remain tight-lipped about the awful things he’s done to keep Maxie in the dark. As for Sonny Corinthos (Maurice Benard), he’s finally seen the light about the seriousness of Mike Corbin’s (Max Gail) condition. Sonny will tell Carly Corinthos (Laura Wright) he doesn’t want to be “that guy,” so he may acknowledge that he’s been living in denial and has to face the facts.