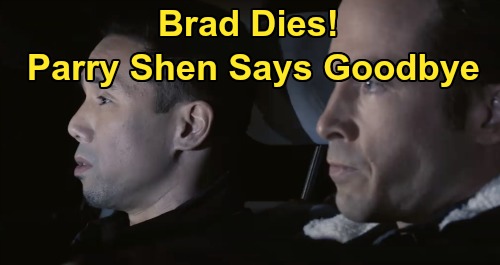 General Hospital (GH) spoilers has some breaking news to pass on about the latest departure from General Hospital. Parry Shen, who portrays Brad Cooper on the ABC soap, has made a statement on his Facebook page clearly indicating that he’s leaving the role.

Parry posted a link to blog post that openly questioned whether he was leaving GH. And in response, he wrote the following: “Well, it certainly feels like I should be paraphrasing Chris Evans’ Endgame tweet, doesn’t it? So with that said…’Playing this role over the last (almost) 7 years has been an honor. To everyone in front of the camera, behind the camera, and in the audience, thank you for the memories! Eternally grateful.’”

And given what’s about to go down on General Hospital right now, this can only mean one thing – that Brad ends up dying in the car accident that he and his husband Lucas Jones (Ryan Carnes) will be involved in this week. GH previews have showed Brad and Lucas in a car together, with Lucas driving and yelling at Brad to tell him what he’s been hiding.

GH viewers will remember that Julian Jerome (William deVry) deliberately tampered with Brad’s car earlier, and other GH previews show Jordan Ashford (Briana Nicole Henry) shining a flashlight around a dark crime scene, which is likely the crash site. It’s looking more and more as if Brad and Lucas will be involved in a terrible crash, probably after the brakes fail on the car.

Other GH spoilers indicate a terrible tragedy as well, with Bobbie Spencer (Jacklyn Zeman) having to deliver terrible news, which will probably be to her son Lucas about Brad’s terrible fate in the accident. Lucas will probably need some big-time support, since he may blame himself for being on bad terms with Brad at the time of the accident and arguing with him in the car prior to the crash.

At any rate, Brad’s death will leave an interesting scenario behind. Lucas will apparently still be in the dark about Wiley Cooper-Jones (Theo & Erik Olson) being the son of Nelle Benson (Chloe Lanier) and Michael Corinthos (Chad Duell). But Nelle will know the truth, as will Julian. One wonders what Nelle will do once she hears about Brad’s death, since her lifeline to her son will have been eliminated.

We’ll see what happens on canvas this week, but the signs are clearly pointing to Brad Cooper being a goner in the car accident. But will he at least try to tell the truth about Wiley before he draws his last breath? On the one hand, it would be very out of character for Brad to do so, but you never know – he could want to implicate Julian before he dies. Of course, whether he’ll be conscious and talking before he dies remains to be seen, but it would be great drama!

Will you miss Brad on GH? Of course it’s possible that Parry Shen is playing a trick on fans and is not really leaving GH as the tweet below possibly indicates – in any case all of us will know soon enough. GH buzz is that someone dies on the show this week and Parry has certainly indicated it could be him. Stay tuned to the ABC soap and don’t forget to check CDL often for the latest General Hospital spoilers, updates, and news. 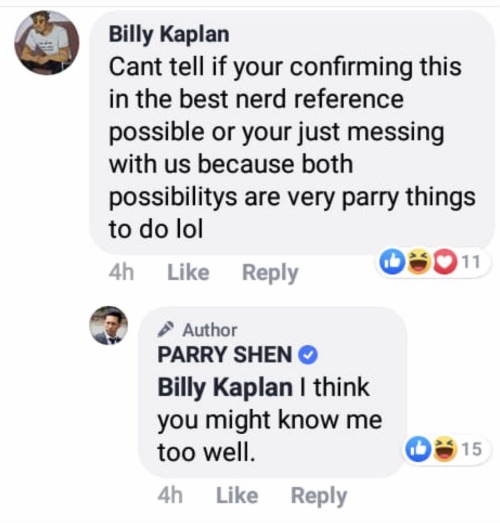