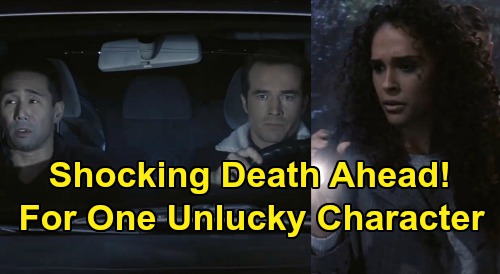 General Hospital (GH) spoilers tease that a fatal bombshell could be coming up. GH buzz suggests someone will die thanks to the accident Julian Jerome (William deVry) is setting in motion. There’s no confirmation on that yet, but it’s easy to see GH is gearing up for something big. They’ve involved several characters and a couple major storylines, so it’s easy to imagine it all ending in a deadly outcome.

Let’s recap what recently happened so we can figure out what’s next. Julian Jerome (William deVry) decided he was done with Brad Cooper’s (Parry Shen) games and took lethal action against him. It looks like he cut the brakes on Brad’s car, so this isn’t going to end well. General Hospital also put out a promo that shows Lucas arguing with Brad as he drives a car. It’s pretty simple to put these puzzle pieces together.

It makes perfect sense for Lucas to drive the car Julian tampered with. Julian will put his own son in danger as a tragic twist of fate. We’ve also got Alexis Davis (Nancy Lee Grahn), who was whacked in the head by Kendra Lennon (Michelle Argyris). Alexis will regain consciousness and end up in a car with Kendra, who’ll explain why she’s seeking this vigilante justice for Kiefer Bauer (Christian Alexander).

So…we’ve got two cars and one that can’t stop. Not a good mix! It’s possible Kendra will toss Alexis out of the car so she can suffer the same fate as Kiefer. That could lead to Alexis getting hit by Lucas, who won’t be able to brake. There’s also a chance Lucas will plow right into Kendra’s car itself. Bottom line, some kind of collision has to happen here.

Alexis doesn’t seem to be going anywhere and will surely recover from any injuries she sustains. Kendra is a dispensable character that most viewers want rid of ASAP, so no one will be surprised if she dies because of the crash. Kendra was only brought on for this arc anyway. There’s no need to keep her alive for any kind of future in Port Charles. This is the end of the road for Kendra, so perhaps she’ll meet a grim fate.

However, we have to consider what’ll happen to Brad and Lucas. Will they both make it out of this alive? Many General Hospital fans certainly hope so. Lucas doesn’t seem to be going anywhere based on the wording of upcoming GH spoilers. There would probably be more hints that pointed to a deadly outcome for him if that were the case.

As for Brad, most of us want him to stick around, too. Michael Corinthos (Chad Duell) deserves the chance to unleash his wrath on the man who stole his baby. GH shouldn’t deprive Michael of that opportunity – or fans of the opportunity to watch!

Whatever the case, General Hospital spoilers say deadly outcome may be on the way. Whether Kendra ends up dead like her brother or another character bites the dust, things are about to get interesting! We’ll give you updates as other GH news comes in. Stay tuned to the ABC soap and don’t forget to check CDL often for the latest General Hospital spoilers, updates and news.