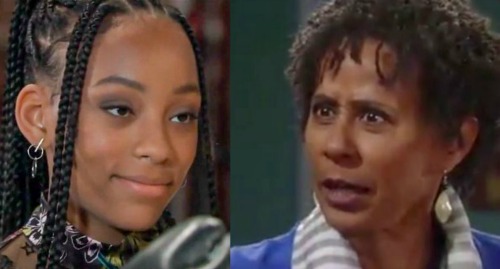 General Hospital (GH) spoilers tease that a mystery will unravel for Trina Robinson (Sydney Mikayla). GH fans know Trina recently admitted she located a close relative through an ancestry site. She backed out of contacting that relative, so maybe Stella Henry (Vernee Watson) is the hit that was found. Stella had a relative that backed out of meeting her after an ancestry connection. Are Trina and Stella long-lost family members? If so, how are they related?

Trina Has a Sister

Trina has a sister who’s about to join the cast, but is she the close relative Trina found or is it someone else? It’s possible she’ll be the hit through the ancestry site, but it’s too early to say for sure. Trina hasn’t mentioned a sister, but she’s never said she was an only child either. If Trina’s sister isn’t her newly discovered relative, Stella could be. With that in mind, let’s consider Trina and Stella’s possible connection.

Could Stella Have Given Up a Child?

Stella broke up with Marcus Godfrey (Nigel Gibbs) to help raise her sister’s kids. However, rewrites happen all the time. General Hospital could divulge some new details and offer more to the story. Could Stella have been pregnant when she and Marcus broke up? Stella might’ve given a child away – a child that just so happens to be one of Trina’s parents.

Curtis And Tommy Might’ve Had a Sibling

Curtis Ashford’s (Donnell Turner) brother and mother are supposedly dead. Nevertheless, Curtis might have had another sibling that no one knows about. It’s possible his mother gave a child away before having Curtis and Tommy. Could Stella have told the boys their mom died to keep them from knowing that she walked out on them? Trina’s mother or grandmother might be Stella’s sister.

Could Stella And Her Sister Have Had Another Sibling?

Nothing much has been revealed about Stella’s family. Does Stella have another sibling out there who will end up being Trina’s mom or grandma? Trina could be connected to the fear Stella has of T.J. Ashford (Tajh Bellow) and Molly Lansing-Davis’ (Haley Pullos) difficult future. She knows they’ll face challenges, especially if they have kids one day.