General Hospital Spoilers: Lonely Jason Lost Without Sam – Should GH Break Up ‘JaSam’ or Let Them Fight for Love? 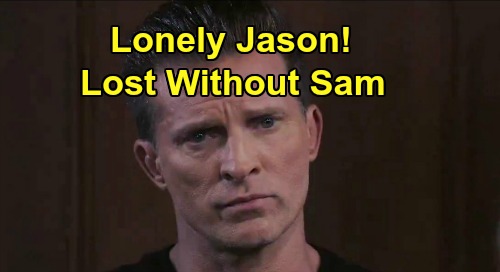 General Hospital (GH) spoilers reveal that there’s been a bit of a debate on social media lately – and it revolves around Jason Morgan’s (Steve Burton) relationship with Sam McCall (Kelly Monaco). These two have been portrayed as true loves, but even true loves can drift apart or blow up!

Soap operas are all about keeping the drama going since they’ve been on for decades. With the exception of some preemptions here and there, they play every weekday year-round. That’s a lot of episodes, so it’s no wonder we see so many breakups, makeups and shakeups in the soap world. They have to do something to create stories, so shifting gears on certain characters’ love lives is reasonable.

That brings us to the debate that’s been going on. The fact that Sam’s in prison and away from Jason seems to be adding fuel to the fire. Is it time for Jason to move on? Should General Hospital split “JaSam” up and let them move on to other pairings? It’s an interesting idea to consider, so let’s look at the pros and cons.

First, let’s talk about the advantages of a Jason and Sam split. It would open the door to some new possibilities and could perhaps break GH out of a rut. It seems like so many of their stories consist of Sam landing in danger and Jason rushing to the rescue. Sam always has Jason’s back too, but that often leads to more trouble for herself – as we see considering Sam’s sitting in Pentonville right now.

Jason will undoubtedly rescue Sam from that situation as well, which will start the whole cycle over again. Sometimes it can feel like the same thing over and over, so some viewers are calling for a “JaSam” breakup – at least for a while. Since Sam’s behind bars, there’s an easy opportunity for Jason to get lonely and for Sam to push him away. It could lead to some relationship struggles and send them down new paths.

Of course, there are plenty of “JaSam” lovers out there who don’t want that at all. Some GH watchers adore the chemistry between Burton and Monaco, so they’re not eager to tear them apart anytime soon. There’s certainly a rich history backing up the Jason and Sam pairing.

Plus, General Hospital took their sweet time putting Jason and Sam back together after Burton finally returned to the show. They dragged their feet for forever, so maybe Sam and Jason chance to go deeper instead. That could happen with a wedding or even another baby after Sam’s eventual release from prison.