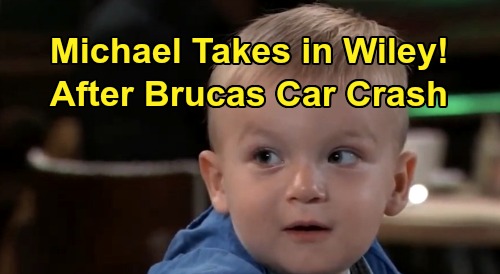 General Hospital (GH) spoilers tease that the baby swap storyline is heating up in a big way. Lucas Jones (Ryan Carnes) knows Brad Cooper (Parry Shen) has some massive secret, and he’s not going to rest until he finds out what it is. Their marriage is in total turmoil right now. Brad can’t talk his way out of this anymore, so we’ve reached a critical point.

It looks like Lucas and Brad will be involved in a car crash thanks to Julian Jerome’s (William deVry) tampering. Julian seemingly cut the brakes on Brad’s vehicle, and Lucas should end up driving that vehicle based on a recent GH preview video. That could certainly put Brad and Lucas in grave danger. Will they both be seriously injured as a result of this murder plot gone horribly wrong?

That seems likely since Julian will make a crushing discovery soon. He’ll end up battling deep remorse over what he’s done. There’s a good chance Alexis Davis (Nancy Lee Grahn) will get caught in all this mayhem, but let’s focus on the “Brucas” outcome for now. Lucas will most likely be injured for drama’s sake. That’ll rev up that remorse angle we mentioned for Julian in the coming weeks.

It makes sense that Brad will be wounded as well. General Hospital spoilers hint that a stunning death may be coming up, so anything can happen here. We know Bobbie Spencer (Jacklyn Zeman) will deliver some horrible news during the week of December 2-6. Even if that just involves Brad and Lucas being in comas, the main idea here is that they’ll surely be incapacitated.

Now we should consider who will take care of little “Wiley Cooper-Jones” (Erik and Theo Olson). His godfather of course! Michael Corinthos (Chad Duell) was always meant to care for “Wiley” if anything ever happened to his dads. What Michael won’t know is that he’ll be taking in his own flesh and blood.

General Hospital spoilers say Michael will accept some much-needed help during the week of December 9-13. Could that mean fill-in father (and secret bio dad) Michael will be feeling overwhelmed? He loves babysitting “Wiley,” but taking care of him full-time will be an adjustment.

It’d be interesting if Michael gets to spend Christmas with his son Jonah without even knowing it! General Hospital may have found a sneaky path to a temporary reunion before the real one. We’ll give you updates as GH details emerge. Stay tuned to the ABC soap and don’t forget to check CDL often for the latest General Hospital spoilers, updates and news.