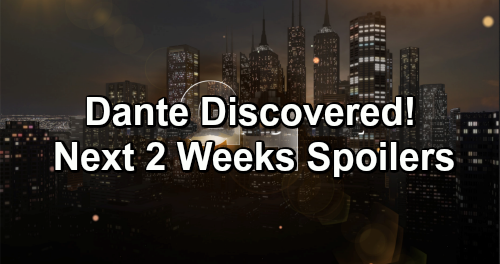 General Hospital (GH) spoilers for the next two weeks tease that the action will heat up in Port Charles. During the week of February 11-15, Ava Jerome (Maura West) will save Dr. Griffin Munro (Matt Cohen) from grave danger and patch things up with “Dr. Kevin Collins” aka Ryan Chamberlain (Jon Lindstrom). Meanwhile, Franco Baldwin (Roger Howarth) will remain stuck in wrongfully accused chaos.

Laura Webber (Genie Francis) will visit Franco pretty soon and try to get a grip on the situation. She may start having some doubts about Lulu Falconeri’s (Emme Rylan) memories, which were brought to the surface by hypnosis. Regardless, Laura will at least want to chat with Franco and see for herself if she thinks he’s still a killer.

Later, Elizabeth Webber (Rebecca Herbst) will plan a shocker. It looks like Valentine’s Day will bring a wedding in lockup. The time is never right for Franco and Liz’s nuptials, so they might as well just do them now. Liz will hope she can use this to lift Franco’s spirits and show him that she trusts him completely.

Over with Cameron Webber (William Lipton), he’ll land in hot water. Let’s just hope he can wiggle out of it and avoid a change in the judge’s sentence. Cam’s on probation, so trouble is the last thing he needs right now.

Other General Hospital spoilers say Nelle Benson (Chloe Lanier) will stir the pot again when she contacts Michael Corinthos (Chad Duell). He hates when Nelle get in touch, but he can never seem to resist finding out what she has to say. Harrison Chase (Josh Swickard) and Willow Tait (Katelyn MacMullen) will also grow closer while another excited couple announces a pregnancy.

During the week of February 18-22, Carly Corinthos (Laura Wright) will get some shocking proof. Will this involve “Wilson Ritter,” the patient she’s obsessed with at Ferncliff? GH fans know that’s actually Dr. Kevin Collins (Jon Lindstrom), so let’s hope Carly discovers something that could help him eventually.

Elsewhere, Franco will express reluctance. He’ll most likely be asked to aid the PCPD with a trap to flush out the true killer. Jordan Ashford (Briana Nicole Henry) is already starting to suspect they’ve got the wrong guy. This is just a little too neat and easy for her. Jordan can tell there’s a more complicated explanation than bad guy turns good and goes bad again.

Other General Hospital spoilers say Sonny Corinthos (Maurice Benard) will contemplate some suspicions. He won’t trust that Robert Scorpio (Tristan Rogers) is giving him the whole truth, so this is probably about Dante Falconeri’s (Dominic Zamprogna) mission. As for Anna Devane (Finola Hughes), she’ll learn some shocking new details about the mysterious virus and why she went blind.

GH fans will also see a showdown between Ryan and Kevin. They’ll lash out at each other when Ryan takes another trip to Ferncliff. Finally, Willow will hang around a nervous Brad Cooper (Parry Shen) more often. She may hope she can work some kind of angle and score some time with “Wiley” Cooper-Jones.

Brad will do his best to keep Willow away from “Wiley,” but it won’t be easy – especially if Michael the godfather keeps letting her get too close. We’ll give you updates as other GH news comes in. Stay tuned to the ABC soap and don’t forget to check CDL often for the latest General Hospital spoilers, updates and news.