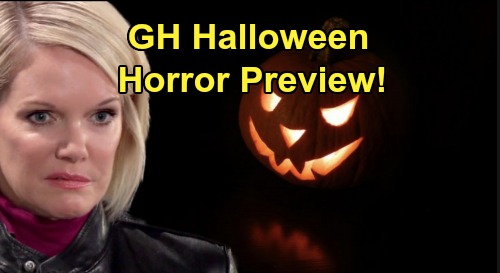 General Hospital (GH) spoilers tease that some spooky shockers are brewing in Port Charles. Halloween is coming up, so now’s a good time for a sneak peek at all the action. It’s always nice to be prepared for the hauntings and horror around town! We’ve got a Halloween preview for you, so let’s dive right in.

For starters, we should talk about a special shindig. A fun group will gather at the Metro Court for the annual Halloween bash. General Hospital spoilers say plenty of PC residents will be on hand to celebrate. There should be lots of crazy costumes on GH as well – especially for the kids and teens.

Speaking of the teens, it’ll be interesting to see what Josslyn Jacks (Eden McCoy), Cameron Webber (William Lipton) and Dev Cerci (Ashton Arbab). We should note that Dev will express interest in the feisty blonde during the week of October 14-18. It’s not clear if Dev will make his feelings known to Joss or someone else, but his interest could be important as we move toward Halloween.

On October 31, Joss and Cam will get caught up in the spirits of the night. Could that mean they’ll indulge in some spiked punch? That’s one possibility to consider. Then again, maybe they’ll take a prank too far and run into some trouble. The last thing Cameron needs is more legal drama, especially if there’s a chance Dev could be dragged into it.

Of course, it’s also possible Cameron and Josslyn will simply cave into their feelings. They’ve loved each other as friends for a long time, so it’d be easy to take the next step. In fact, Cameron’s seemed ready to take that step since last year. He just had to back off due to the whole Oscar Nero (Garren Stitt) situation.

Josslyn has been stuck in grief for a while now, so many GH fans are eager to see her move on. Soaps aren’t like real life. Deaths like Oscar’s should be acknowledged and respected, but characters should let go quicker than people would in the real world. It can get pretty repetitive otherwise. We honestly just don’t need any more scenes of Josslyn mourning. Enough with Oscar’s Meadow!

General Hospital spoilers say a new teen love triangle could finally be starting. The high school’s Halloween dance will be held on The Haunted Star, so that sounds like the perfect place for some magic to happen. Will Josslyn and Cameron share a kiss that Dev witnesses? That’d be a soapy way to cap off the evening.

However, it’s Ava Jerome (Maura West) who may face the biggest Halloween bombshell. She’ll notice a masked man at the Metro Court party and sense that he’s following her. At the art gallery, this man will likely reveal himself. Will it be an escaped Ryan Chamberlain (Jon Lindstrom)? Could GH pull a fast one and make it Nikolas Cassadine (Tyler Christopher) instead?

Regardless, Ava’s Halloween may bring the shock of her life! We’ll give you updates as other GH news comes in. Stay tuned to the ABC soap and don’t forget to check CDL often for the latest General Hospital spoilers, updates and news.