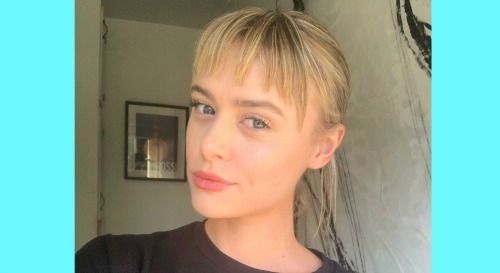 General Hospital (GH) spoilers reveal that one ABC soap star has a brand-new look, so she decided to show it off to her fans. GH viewers know Hayley Erin as Kiki Jerome, a well-liked character who met a tragic end back in 2018. However, Erin made a comeback to General Hospital not too long ago. In August, Kiki appeared to Ava Jerome (Maura West) and refused to give her mother the closure she was seeking.

There’s always a chance Kiki will return to deliver that closure eventually. It’d be cruel for GH to leave Ava hanging like this! Regardless, Erin had some personal news to share in the meantime. On Instagram and Twitter, Erin posted a picture along with a caption that said, “I did a thing.” The photo featured Erin with bangs, so she got plenty of comments about the new do!

Michelle Stafford (ex-Nina Reeves, currently Phyllis Summers on The Young and the Restless) also responded to Erin’s “I did a thing” post. She replied, “A BEAUTY thing.” Brytni Sarpy (ex-Valerie Spencer, currently Elena Dawson on Y&R) wanted to chime in, too. She definitely thought Erin’s look was sleek and sophisticated! Sarpy gushed, “you look so Europeannnnnn!!”

Before Erin’s bangs made their debut, she gave fans a little hint. The night before she posted a photo, Erin asked a question that tipped everyone off to her latest hair decision. She tweeted, “Has anyone else ever cut bangs then instantly realized they’re severely claustrophobic? I’m, uh, asking for a friend…?”

Erin’s real-life friend, Camryn Grimes (Mariah Copeland on The Young and the Restless), had her own case of bangs regret, which she posted about on social media last year. She spoke from experience when she replied to Erin with a GIF saying, “Ja feel.” Most of us can relate to having a haircut we were unsure about at one time or another!

Fortunately, Erin seems to be adjusting to that claustrophobia she mentioned. Of course, it’d be interesting if Erin made another Kiki return while sporting these bangs. GH viewers would undoubtedly crack jokes about Kiki’s excellent hair stylist in the afterlife.

As for what’s next in Port Charles, General Hospital spoilers say Kiki’s killer will continue to torment Ava. Ryan Chamberlain (Jon Lindstrom) has a few tricks up his sleeve, so stay tuned for more drama. We’ll give you updates as other GH news comes in. Stick with the ABC soap and don’t forget to check CDL often for the latest General Hospital spoilers, updates and news.

I did a thing pic.twitter.com/JHPBS3HNzI