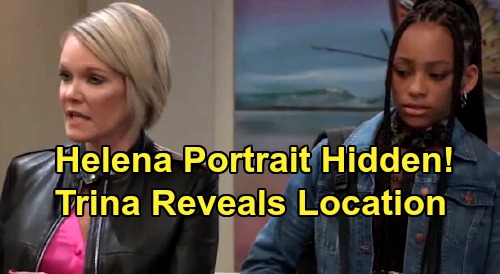 General Hospital (GH) spoilers tease that Ava Jerome (Maura West) will remain at Shadybrook for a while. As GH viewers know, she checked herself in for intensive treatment after suffering a nervous breakdown at her gallery. She came face to face with Nikolas Cassadine (Marcus Coloma), but later came to believe that she had hallucinated his presence. Now she’s stuck in Shadybrook where she’s routinely sedated.

Well, this all happened at an interesting time, considering that Ava seemed to hide the highly desired portrait of Helena Cassadine (Constance Towers) somewhere in storage shortly before she entered Shadybrook. As GH viewers know, there are several people who are anxious to find the portrait and unlock the clues it holds to the whereabouts of the codicil to Mikkos Cassadine’s (John Colicos) will.

Nikolas needs to find the codicil so he can reclaim the Cassadine fortune from Valentin Cassadine (James Patrick Stuart). And on his behalf, Jasper “Jax” Jacks (Ingo Rademacher) and Hayden Barnes (Rebecca Budig) have been searching for the portrait, along with Laura Collins (Genie Francis), who doesn’t even realize that Nikolas is alive. And now, Valentin is curious about the portrait as well, although he knows nothing about the codicil or Nikolas’ existence.

But there’s someone else who could become a key part of this storyline, and that’s Trina Robinson (Sydney Mikayla). As GH viewers will remember, Trina recently took a position as an intern at Ava’s gallery. That was right before Ava managed to acquire the portrait of Helena from Dev Cerci (Ashton Arbab), who sold her the painting after finding it with some trash.

Well, it seems pretty likely that Trina could be privy to where Ava stashed the portrait of Helena. Of course, Trina won’t be around at the gallery for a while, since she recently revealed that she was grounded. But at some point, she’ll probably be back to the gallery, and that could leave her vulnerable to someone who might come poking around the gallery and asking questions about the portrait.

That person could be Jax, Hayden, Laura, or Curtis Ashford (Donnell Turner). Might one of them be able to cajole Trina into revealing the location of the portrait? Trina might have no clue that Ava wants the portrait to be kept hidden – after all, it doesn’t look like Ava has mentioned anything about other people wanting the portrait to Trina, even when Trina came to Shadybrook to visit.

Of course, Ava’s in the dark about the true importance of the portrait. If she knew that Nikolas is alive and is behind the search for the portrait and the codicil, then that would be a game changer for her, since she’d learn that she wasn’t hallucinating when she saw Nikolas and that she needn’t be in Shadybrook at all.

At any rate, it will be interesting to see how Trina ends up playing into this drama, and since Ava’s busy getting treatment at Shadybrook, it seems pretty likely that she’ll factor into this storyline at some point once her grounding is lifted. But will she be the reason that someone ultimately finds the portrait, and therefore the codicil?

Of course, if the codicil is found and Nikolas ultimately makes his presence known to the people of Port Charles, then Ava will probably immediately leave Shadybrook, since she’ll realize that she wasn’t hallucinating when she saw him. So ultimately Trina could do Ava a big favor if she reveals the location of the painting…as long as the person she reveals it to isn’t Valentin!

Do you think Trina will factor into someone’s discovery of Helena’s portrait? Stay tuned to the ABC soap and don’t forget to check CDL often for the latest General Hospital spoilers, updates, and news.