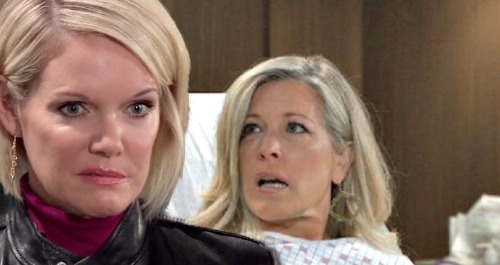 General Hospital (GH) spoilers tease that Ava Jerome (Maura West) will stir up some trouble. During the week of July 15-19, Jason Morgan (Steve Burton) will worry about his bestie. Carly Corinthos (Laura Wright) is pregnant and there are plenty of risks involved, so Jason will have a good reason to be fearful. Unfortunately, Ava may end up making matters worse.

Kristina Corinthos-Davis (Lexi Ainsworth) will give Ava a stern warning, which could tie in with Carly. GH viewers know Kristina’s been a bit closer to her family ever since she escaped from Dawn of Day. Since Sonny Corinthos (Maurice Benard) plays a bigger role in her life now, so will her stepmom. Kristina may sense that Ava’s going to shake things up at an already stressful time and advise against it.

However, Ava does what she wants when she wants, so a warning from Kristina wouldn’t change her mind. On July 16, General Hospital spoilers say Ava will head to GH for a meeting. Since Jason will fret about Carly beforehand, perhaps Ava will meet with a hospitalized Carly. It’s certainly an option to consider.

That’s because Ava’s psychic will be whispering cryptic things in her ear. She may plant some crazy ideas about Avery Corinthos’ (Ava and Grace Scarola) well-being. Ava lost Kiki Jerome (Hayley Erin), so she could get fierce about spending time with Avery and watching out for her. She already doesn’t like the fact that Carly serves as Avery’s main mom.

Of course, a fight is the last thing Carly needs right now. She’s stressed to the max over her unborn baby’s spina bifida and the unknown severity of it. General Hospital spoilers say Sonny will be enraged with Ava on July 17, which will be just after her GH meeting. It makes sense that Ava could pop in on Carly and get her all riled up.

The show seems to be looking for ways to rev up the pregnancy drama and make things hard on Carly. This could be another path toward danger for Carly. The more stress Carly’s under, the worse off she’ll be. General Hospital has dropped hints about the possibility of a stroke for Carly, so that could be what they’re building to down the road.

GH fans won’t want to miss all the shockers ahead. We’ll give you updates as other news comes in. Stay tuned to the ABC soap and don’t forget to check CDL often for the latest General Hospital spoilers, updates and news.