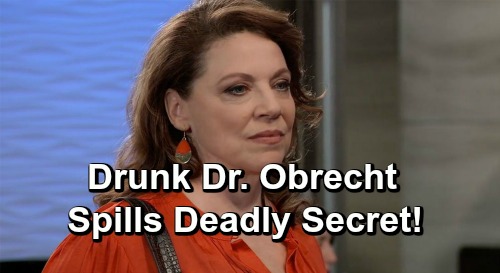 General Hospital (GH) spoilers tease that Franco Baldwin (Roger Howarth) and Elizabeth Baldwin (Rebecca Herbst) will hope for a fun evening. Their wedding was sweet, but it wasn’t exactly a lavish gathering! This reception won’t be too extravagant either, but the guest list will definitely be longer and Franco won’t be behind bars for it. That alone is a win in Franco and Liz’s book!

The happy couple will want to share their love with all their family and friends. Liz and Franco will expect this to be a perfectly pleasant event, but it’ll actually be a mixed bag. There’ll definitely be a fun surprise, but there’ll also be a couple of bizarre ones. Let’s talk about three shockers that will strike at Franco and Liz’s big bash.

For starters, Liz will be thrilled by one unexpected guest. During the week of July 8-12, Hayden Barnes (Rebecca Budig) will return just in time to celebrate with Liz and Franco. She’ll also stun Hamilton Finn (Michael Easton), who’ll be on hand for this special occasion.

General Hospital spoilers say that’ll bring some awkward moments, but what about Finn and Hayden’s kid? It doesn’t look like Hayden will drop the bomb at the wedding reception. The timing isn’t right since Hayden wouldn’t want to derail the festivities. Her presence alone will be enough for Finn to deal with, so she may just plan to break the news to him later.

However, a different party crasher will shake things up. It turns out Ava Jerome’s (Maura West) psychic will appear with fortunes to read and predictions to make. Alas, those predictions may not be too rosy. This clairvoyant may manage to create a weird vibe with her strange ramblings. She’ll have a cryptic message for Ava as well as several other baffled attendees.

Liesl Obrecht (Kathleen Gati) will be the third partygoer to cause drama. She’ll get drunk and that’s never a good idea if you’re the keeper of too many secrets! General Hospital spoilers say Liesl will indeed divulge at least part of the story to Franco, but which story? GH fans know Liesl’s hiding the truth about both “Wiley Cooper-Jones” and Sasha Gilmore (Sofia Mattsson).

There’s already enough going on in the “Wiley” storyline right now. There’s really no need to involve Liesl just yet. Plus, we know Liesl will battle regrets once she sobers up. She’s merely saving Nelle Benson’s (Chloe Lanier) secret for a rainy day, so she wouldn’t have too much remorse about that.

Liesl has leverage when it comes to Sasha, but she also has a lot to lose. Valentin Cassadine (James Patrick Stuart) will unleash his vicious wrath if Liesl blows this for him. It also makes more sense to have Franco involved in Nina Reeves’ (Cynthia Watros) story, so it’s probably safe to say Liesl will spill part of the Sasha secret.

General Hospital spoilers say Franco won’t know what in the world Liesl’s babbling about, but will he find clarity later? This party will bring some dangerous developments, so don’t miss all the action. We’ll give you updates as other GH details emerge. Stay tuned to the ABC soap and don’t forget to check CDL often for the latest General Hospital spoilers, updates and news.