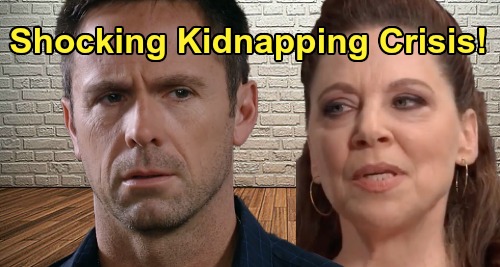 General Hospital (GH) spoilers tease that Liesl Obrecht (Kathleen Gati) has some trouble headed her way. Brad Cooper (Parry Shen) just won’t trust that he can ever put this problem behind him. Unless drastic action is taken, Brad will sense that Liesl’s going to blow up his world. He’ll refuse to lose his family, so he’ll turn to Julian Jerome (William deVry) and hope he can rope him into a deadly plot.

Brad will come clean about “Wiley Cooper-Jones’” true identity and admit he pushed Liesl off The Haunted Star. Julian’s anger will erupt over the “Wiley” confession, but Brad’s admission about Liesl won’t surprise him. He’ll start to see that Brad’s capable of anything, especially since his family’s future is on the line.

Brad will explain that Liesl knows the whole story since she delivered Nelle Benson’s (Chloe Lanier) baby. He didn’t think Julian would help him if he revealed Jonah Corinthos was stolen from Michael Corinthos (Chad Duell). GH spoilers say Julian will likely agree on that. It’s doubtful Julian would’ve participated if he’d known this was Sonny’s grandkid.

However, what’s done is done and now Julian’s in too deep. Brad will point out that Sonny could kill them both if the truth is exposed. He’ll wonder if Julian really wants Lucas to lose “Wiley” and grieve both their deaths as well. Brad will try to use that as motivation when he pushes Julian to kill Liesl. He’ll think it’s the only way to protect themselves and avoid Sonny’s deadly vengeance.

Julian will eventually reach a risky decision on the matter. It’s tough to imagine Julian killing Liesl since he’s one of the good guys now. We understand that Julian wants to protect Lucas and his fam, but that’d be going too far. Julian may not be keen on letting Liesl remain free either. She’ll seek a favor from Brad right around the time Julian make his choice, so he might worry she’s never going to stop.

Could Julian kidnap Liesl and hold her hostage for a while? He may feel he needs time to consider a more permanent solution. There’s even a chance Julian could plan to kill Liesl and then back out at the last second. A kidnapping could be a backup strategy.

Valentin Cassadine (James Patrick Stuart) recently alluded to Liesl’s experience as a kidnapper. General Hospital fans know Liesl held Peter August (Wes Ramsey) hostage last summer, so maybe it’s her turn! Will Julian give Liesl a taste of her own medicine? We should mention that Patrick J. Gibbons will reprise his role as Wyatt Hoover soon. He’s the Raging Racoon scout who found Peter at the cabin.

Will Wyatt find captive Liesl during his next stint? That’s be a humorous twist and could lead to more issues for Julian as well as Brad. Whatever the case, General Hospital spoilers say some exciting drama’s ahead. We’ll give you updates as other GH news comes in. Stay tuned to the ABC soap and don’t forget to check CDL often for the latest General Hospital spoilers, updates and news.