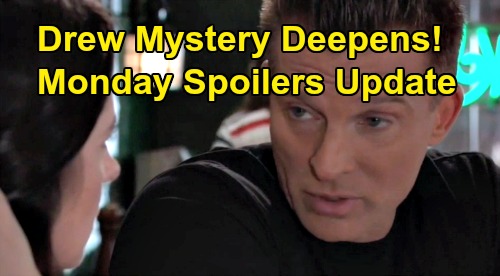 Over with Elizabeth Baldwin (Rebecca Herbst), she’ll also be a mess over Franco. Liz is struggling without her husband, so she’ll drop by Andre Maddox’s (Anthony Montgomery) room. GH spoilers say Liz will want to talk about the memory reversal procedure. She’ll wonder if Andre can bring Franco back, but that’s not a promise he can make. Andre can only assure Liz that he’ll do what he can.

Monica Quartermaine (Leslie Charleson) will make a stop in Andre’s room, too. She’ll go over Andre’s chart and let him know his vitals look good. Andre will admit he’s trying to make amends for his mistakes by helping Franco. Monica will understand that, but part of her will fear Andre’s success. She won’t want Drew Cain’s (Billy Miller) memories to disappear before she can hear about them.

As a result, Monica will take action soon. She’ll head over to Franco’s hotel room to inquire about the past. Franco may be guarded at first, but he could open up eventually. It should be nice to have someone ask about the life he actually remembers. Franco doesn’t feel like Franco at all, so he’ll enjoy being embraced as Drew – even if it’s just for a conversation.

Other General Hospital spoilers say Julian Jerome (William deVry) will get an offer. Sonny will arrive at Charlie’s Pub to do a little business with Julian. He’ll be willing to pay a pretty penny for something Julian has that he wants.

Next, Brad Cooper (Parry Shen) will appear and immediately get nervous. Just being around Sonny is enough to leave Brad unsettled, especially since he’s already been on edge over Liesl Obrecht (Kathleen Gati). Once Sonny’s gone, Brad will fill Julian in on a problem. He’ll insist Liesl poses a serious threat and deliver the Jonah Corinthos shocker. Brad will admit he left out the part about Nelle Benson (Chloe Lanier) being the true birth mom.

As Julian realizes Sonny is “Wiley Cooper-Jones’” grandfather, General Hospital spoilers say he’ll hit the roof. Brad has put both of their lives in grave danger. However, it’s Dr. O who could be in the most peril first. Brad will push Julian to return to his mob roots and kill Liesl!

Meanwhile, Michael Corinthos (Chad Duell) will enjoy a visit with his godson – who he doesn’t know is his real son. Michael and “Wiley” will be together when Willow Tait (Katelyn MacMullen) approaches. She’ll let Michael in on a secret, but it’ll just be a lighthearted confession to help them bond. Michael will also make an observation he finds interesting. It may be some baby switch clue that he won’t pick up on just yet.

Across town, Jason Morgan (Steve Burton) will consider some strange occurrences. During his discussion with Sam McCall (Kelly Monaco), Jason will talk about Andre’s stabbing and Drew’s vanishing plane. He’ll suspect this is more than a simple coincidence. Jason will feel certain that the two incidents are connected, but he won’t know who’s responsible.

Finally, Jordan Ashford (Briana Nicole Henry) and Curtis Ashford (Donnell Turner) will consider the facts. They’ll run down what they know about missing Drew, which isn’t much at the moment. Jordan will mention that Drew was the only passenger on board. She’ll assume Drew was a target and most likely acknowledge the possibility of a crash.

That may be tough for Curtis to accept since Drew’s his bud, but he’ll keep digging for answers anyway. Those answers may be painful, but Curtis will want to know the whole story. We’ll give you updates as other GH news comes in. Stay tuned to the ABC soap and don’t forget to check CDL often for the latest General Hospital spoilers, updates and news.