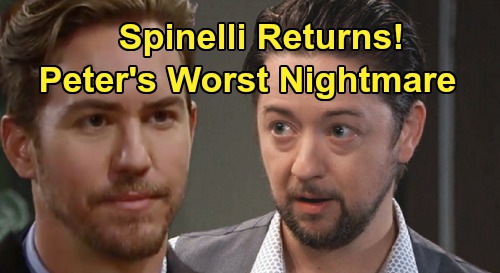 General Hospital (GH) spoilers tease that Damian Spinelli (Bradford Anderson) will be back on the scene soon. It sounds like Jason Morgan (Steve Burton) will summon Spinelli to return for a crucial task. There’s no word yet on what that might be, but it makes sense that this might be connected to Drew Cain (Billy Miller).

During the week of September 9-13, Jason will ponder this mystery. He’ll think there are major red flags here. They can’t ignore the timing since Andre was stabbed right before Drew’s jet vanished. Jason will assume the person who wanted Andre dead also made Drew disappear.

The plane still hasn’t been spotted on radar, but Spinelli has the magic touch on just about everything. He may have some plans in mind to help. The week of September 16-20 will bring suspicions for Spinelli. General Hospital spoilers say Spinelli will think something just isn’t right, so he’ll follow some leads and see what happens.

Could The Jackal find out Drew’s plane went down and still wonder about his survival? Something about the crash may not add up for Spin. He might feel like it was all staged to make them stop looking for Drew – which could easily be the case. If Spinelli is indeed involved in the search for Drew, he’ll definitely want to exhaust all options.

Jason and Sam will as well, especially for Scout Cain’s (Ella Ramacieri) sake. If Scout’s dad is still out there somewhere, they have to make every effort to find him. That doesn’t mean they’ll succeed necessarily, but they have to try.

Billy Miller has already wrapped his run at GH, but he could always come back down the road. A Drew recast is another option. Either way, General Hospital might keep the story going for a while. Spinelli’s digging may not get him anywhere right now, but it could set up some helpful puzzle pieces for the future.

Do you think Spinelli will help Jason seek Drew answers? Peter August (Wes Ramsey) could be in real trouble if Spinelli traces something back to him. General Hospital spoilers say some great drama’s coming up. We’ll give you updates as other GH news emerges. Stay tuned to the ABC soap and don’t forget to check CDL often for the latest General Hospital spoilers, updates and news.