General Hospital Spoilers: Curtis and Valentin Team Up, Hunt Is On for Nina’s Daughter – Desperate Mission Leads to Startling Reunion 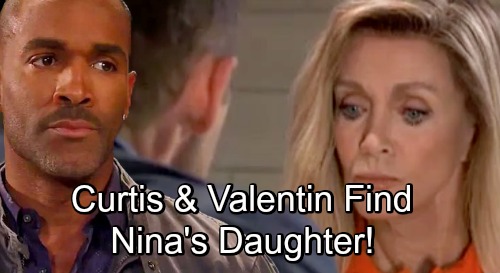 General Hospital (GH) spoilers tease that Valentin (James Patrick Stuart) will need a plan. Nina (Michelle Stafford) has already made it perfectly clear that she doesn’t want to reunite. However, Nina will reiterate her stance soon enough. She’ll want Valentin to understand that her wounds run too deep. Nina has overlooked a lot during their time together, but she can’t get past this last hurdle.

Valentin knows how much Nina’s longed for a child over the years. The idea of him handing over an innocent baby to Faison (Anders Hove) was just too much for her. Peter (Wes Ramsey) aka Heinrik was in a happy home with his adoptive parents. Valentin ripped him out of that loving situation and placed him with his evil father. Faison was a total menace, so Nina just can’t cope with Valentin’s cruelty.

Of course, all the secrets and lies were a problem as well. Valentin contributed to Nathan’s (Ryan Paevey) death by staying silent about Peter’s true identity. That gave Faison a chance to confront Peter and ultimately shoot Nathan. That was a big deal for Nina, but it seems like the Heinrik baby stuff is what GH wants to focus on. It’ll be important as this storyline moves forward.

General Hospital spoilers say Valentin will try to make up for his actions. After a conversation with Madeline (Donna Mills), Valentin will believe Nina’s daughter is still alive and kicking. Naturally, that’ll leave Valentin with a real challenge. He has to track this woman down and reunite her with Nina. She’s not the baby Nina would like to raise, but she’ll be better than nothing.

Valentin has many resources, but he’ll soon determine that Curtis (Donnell Turner) is the best man for the job. General Hospital spoilers say Valentin will corner Curtis and ask for his services. He’ll hope this P.I. can help him uncover the identity and whereabouts of Nina’s little girl – who’s now all grown up!

The hunt will be on, but Curtis will undoubtedly have to keep Nina out of the loop. Valentin wouldn’t want to get her hopes up too early. GH fans can expect Curtis to run into Nina after he hears about the assignment. He’ll probably be cryptic and stir up a few suspicions, but Nina may try to put his weird behavior out of her mind.

Can Curtis give Valentin the info he needs? Will he crack the case and help Valentin play the hero? We’ll give you updates as other GH news comes in. Stay tuned to the ABC soap and don’t forget to check CDL often for the latest General Hospital spoilers, updates and news.