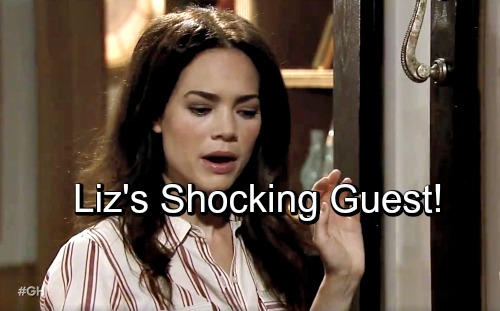 General Hospital (GH) spoilers tease that a huge surprise is headed Liz’s (Rebecca Herbst) way. GH fans will recall that Sarah Webber (Sarah Laine) put up a “MyFace” post about Liz’s engagement. Someone mysterious gave it a “like,” so GH will ultimately have to show us who clicked. The answer will shock both Liz and General Hospital viewers!

There’s no confirmation on Liz’s visitor just yet, but we can make a good prediction. Some casting sides leaked last month and they pointed in this direction. The characters’ names were disguised in the scene, but the dialogue lined up with what Liz and Franco (Roger Howarth) usually say. It was easy to pick up on Liz’s sweetness and Franco’s particular peculiar sense of humor.

In GH’s weekly promo, Liz opens the door and looks taken aback. That also fits with the casting sides, which hint at the return of an old friend. Of course, Liz won’t just be stunned because it’s been a long time. The leaked scene reveals that Liz’s male pal from childhood is now a woman.

It looks like General Hospital intends on doing a transgender storyline. “Terry” was the name teased, but that could change by the time it hits the screen – as it works out it won’t change, the character played by Cassandra James will be named ‘Terry.’ There was even some buzz about GH doing a sex change for Lucky (Jonathan Jackson), but that’d be pretty wild after all these years. Instead, Terry is probably another one of Liz’s former flames. It’d be simpler to make it someone we haven’t met before.

The casting sides feature “Terry” and “Kathleen” (aka Liz) talking about old times. Later, “Kathleen’s” boyfriend comes home and is blown away. “Ben” (aka Franco) is puzzled since “Terry” was apparently “Kathleen’s” first kiss. When questioned about his feelings, “Ben” admits he’s relieved. He expected to be jealous of “Kathleen’s” ex, so he feels like the pressure’s off.

On July 3, General Hospital spoilers say Franco’s fears will quickly fade. It sounds like he’ll find Terry with Liz and get the relief we talked about. Will Terry pass along any info about Liz’s family? Will she spill secrets and drive this hot plot forward? We’ll give you updates as other GH news comes in. Stay tuned to the ABC soap and don’t forget to check CDL often for the latest General Hospital spoilers, updates and news.

Update: Transgender woman Cassandra James is playing the role of Terry, an old friend of Liz.

I’m the first transgender #FeaturedJLuxBabe!!! They wanted to talk to me about gender, making history at the Dolby Theatre and of course, clothes! Check out the clip here and go watch the full interview on the @JLUXLABEL FB page. https://t.co/F2xzoxJnSB pic.twitter.com/VS8lOKdQLd