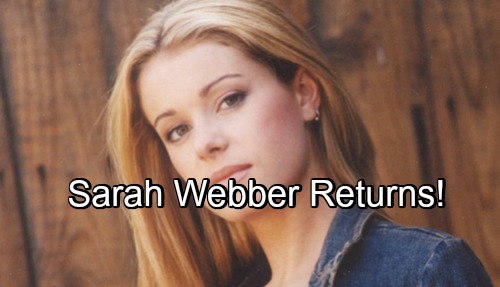 General Hospital (GH) spoilers tease that Franco’s (Roger Howarth) wedding mission will continue. Liz (Rebecca Herbst) would prefer to have a simple celebration, which would probably be for the best. GH fans know an earthquake derailed their last nuptials. It became a real fiasco, so Liz isn’t keen on Franco’s big wedding dreams. There’s no need to turn this into another huge production.

Nevertheless, Franco wants plenty of people to join in the fun. He’d at least like for Liz to have some familiar faces there. They don’t have to make this a massive family reunion or anything, but a handful of extra guests might be nice. General Hospital spoilers say Liz will keep trying to dissuade Franco, but he’ll concentrate on his goal anyway. He’ll just want to help Liz reconnect with her loved ones.

Franco already did an Internet search on Dr. Jeff Webber (Richard Dean Anderson). He later reached out to Sarah Webber (Sarah Laine) and got a reply. Since Sarah’s excited for Franco and Liz, she may be headed back to town. How can she stay away now that she knows about the nuptials? A good sister would return and watch them tie the knot.

Liz has been busy with her boys and a love interest who has loads of enemies. She’s always taking care of the kids, supporting Franco or working at General Hospital. That doesn’t leave a lot of time to dash off and visit Sarah.

Likewise, Sarah has been off doing her own thing. She’s a pediatric cardiologist, so she undoubtedly has many patients who rely on her. Liz and Sarah have drifted apart, but now’s the perfect time to catch up and bond again.

Of course, there are always complications when old family members resurface. Sarah’s Port Charles comeback could bring major drama. Sarah Laine doesn’t seem to be doing much acting these days. The same goes for Sarah’s previous portrayer, Jennifer Sky. A recast may be a likely option if Sarah indeed comes to PC.

GH could even add a new doctor to the staff if Sarah chooses to stick around. Regardless, Franco will try to bring the Webber women together. He’ll also rely on Sarah for more info on Liz’s parents. It’s easy to see that Franco’s begging for trouble!

General Hospital spoilers say this plan could have shocking consequences. Sarah may have a few secrets that could spark chaos. If this mission goes awry, will Franco and Liz’s engagement be in jeopardy? We’ll give you updates as other GH news comes in. Stay tuned to the ABC soap and don’t forget to check CDL often for the latest General Hospital spoilers, updates and news.