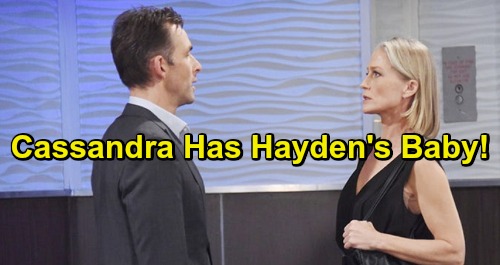 General Hospital’s Hayden was forced to leave town by her ex-husband, but she chose not to come back home to Hamilton Finn (Michael Easton) and to tell him their child had died. When Hayden chose to tell Finn she lost their baby, she was extremely pregnant, and if she had gone into labor, the baby would likely have survived. So why does Hayden want Finn to believe his child is dead?

Finn Was Forced To Save Cassandra

Finn was forced to save Cassandra when she was in a coma and Cassandra disappeared. Did Hayden help Cassandra after her escape because Cassandra forced her to do so?

No one knows where Cassandra has been since her escape, but someone had to help her to get out of the facility and into the limo she was seen in last. It cannot be put past Cassandra to kidnap a child to get what she wants.

General Hospital spoilers remind fans that Hayden’s child has not been seen since she returned to town. Frankly, we never saw this child, so we don’t even know if it lived of not. There has to be some explanation to where this baby disappeared to and Hayden giving it away does not make any sense.

Why would Hayden give away her only child? Lying to Finn is one thing, but giving his baby away is beyond cruel, especially after lying about its death. Hayden loved Finn and would have loved their child. Finn would have raised that baby alone if he had to, where is the baby now?

Jax has kept a child from his father before because it happened with Spencer Cassadine (Nicholas Bechtel). However, what would Finn gain by kidnapping Hayden’s child?

There is no possibility of this baby being Jax’s, kidnapping it would make no sense. Cassandra, on the other hand, is a sick and twisted woman who wants revenge on Valentin and if kidnapping a child could help her get it, that is exactly what she would do.

Cassandra Pierce is the most likely candidate in the explanation of baby Finn’s disappearance. Cassandra could certainly have this child, and this could be why Hayden wanted to meet with Finn months ago. If Cassandra has the baby, where is it and will it ever be returned to its parents Finn and Hayden? Make sure to return to CDL for all of your General Hospital spoilers, updates and news!