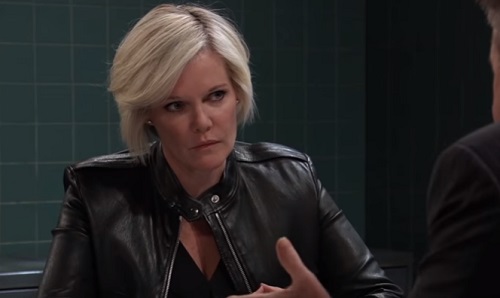 Ava will wonder what Scott’s doing there and insist she doesn’t need a lawyer. Scott will disagree and refuse to let Ava walk into that arraignment alone. He’ll insist on giving Ava some help, but she’ll think there’s a better way for Scott to do that. Ava will just want confirmation that she killed Ryan Chamberlain (Jon Lindstrom).

Scott will confess that he can’t answer Ava’s question. He won’t know if Ryan died on the operating table or not, but Ava will express hope that he did. Scott will shift gears a bit and focus on the stabbing. He’ll urge Ava to tell him what happened, so she’ll offer her simple version of events.

General Hospital’s sneak peek clip shows Ava saying, “Justice happened. I put a knife in Ryan’s back and my only regret is that I didn’t twist it.” Scott will insist that Ava can think that, but she can’t say it – at least not in court. He’ll contend that if Ava doesn’t listen and Ryan dies, she’ll be facing a murder rap. Scott won’t think Ava should go down for this if she doesn’t have to.

Ava will gripe about Scott acting like she’s done something to be ashamed of. She’ll suggest that if Ryan indeed dies, she’ll be proud that she finally avenged her daughter. From practically the moment she found out, Ava has been craving vengeance for Kiki Jerome’s (Haley Erin) murder. Her desires undoubtedly revved up after Ryan revealed what Kiki said before her death.

Ryan claimed that Kiki cried for “Mommy” and wanted him to tell Ava she loved her. We’d say that story was completely fabricated by sadistic Ryan, but it accomplished what he wanted. Ryan gets a thrill out of causing pain. Regardless, Ava clearly found plunging that knife into Ryan’s back satisfying.

As for Scott, he won’t care what Ava wants to call this. She can call it revenge, justice, whatever… Scott’s main concern will just be getting Ava to plead not guilty in that courtroom. General Hospital spoilers say Scott will work hard to get Ava on board with his legal strategy, so stay tuned to see what’s next in this hot plot.

It sounds like some fantastic drama is on the way. We’ll give you updates as other GH news comes in. Stick with the ABC soap and don’t forget to check CDL often for the latest General Hospital spoilers, updates and news.