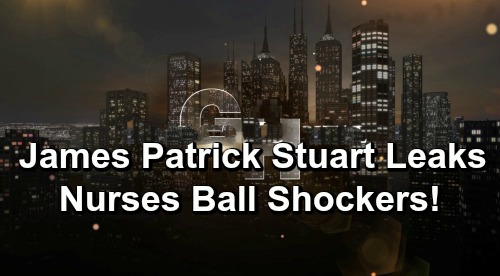 General Hospital (GH) spoilers tease that there’s some exciting Nurses Ball news to report. James Patrick Stuart (Valentin Cassadine) tweeted out some important updates on the event, which GH fans always look forward to. Stuart revealed that the cast and crew are shooting the huge shindig this week, so you can bet they’ve got some explosive scenes cooking.

Of course, the Nurses Ball features plenty of lovely gowns for the ladies and stylish tuxedos for the men. Stuart commented on how the General Hospital gang’s getting all dressed up as usual. He even mentioned that he had a surprise treat in store for everyone to munch on.

“Filming GH’s Nurses Ball this week,” Stuart said on Twitter. “Everybody working hard to look their absolute best. I’m bringing donuts.” Naturally, viewers expect the truth about Sasha Gilmore (Sofia Mattsson) to be exposed right around the time of this party. It makes sense as a great May sweeps shocker, but what about Michelle Stafford (Nina Reeves)? Will she be part of these scenes?

Stafford is leaving the role of Nina and heading back over to The Young and the Restless soon. She’ll be reprising her role as Phyllis Summers on Y&R, but she isn’t going anywhere just yet! Thankfully, it looks like Stafford’s Nina will be around for the big reveal. When a GH fan expressed hope that Stafford was still filming, Stuart confirmed that she indeed is.

That means Nina will attend the Nurses Ball along with Valentin, which is awesome to hear. If a recast had been brought in immediately, the storyline would’ve suffered. We need Stafford’s Nina to play the heartbreak of finding out Valentin lied once again. It’ll have more emotional impact with Stafford in the role, so it’s nice that GH was able to work this out.

General Hospital spoilers say a devastated Nina will discover Sasha isn’t her bio daughter after all. Willow Tait (Katelyn MacMullen) obviously appears to be the real one, but will Stafford’s Nina be around for that revelation as well? It seems doubtful, but more details will be revealed as time goes on.

Are you glad Michelle Stafford hasn’t left yet and will be around for some Nurses Ball chaos? We’ll keep you posted as other GH news comes in. Stay tuned to the ABC soap and don’t forget to check CDL often for the latest General Hospital spoilers, updates and news.