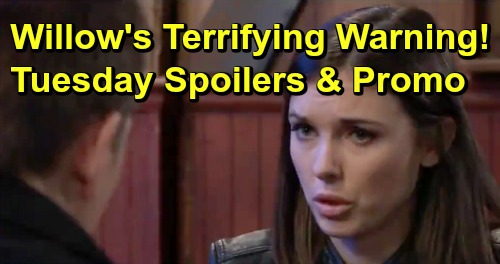 During Jordan’s last conversation with Ava Jerome (Maura West), they were on the same page about Ryan faking his death. Cutting off his own hand as proof is totally something Ryan would do. However, Jordan may feel like her hands are tied now. She’ll probably fear Ryan will come back to do more damage, but another meeting will get underway to prevent that.

General Hospital spoilers say Ava, Laura Webber (Genie Francis) and Felicia Scorpio (Kristina Wagner) will discuss a plan of action. Felicia will insist that they have to lure Ryan back to Port Charles on their timetable.

It’d be better than Ryan having the element of surprise on his side. Ava will likely be all in, but Laura might think this is a terrible idea. It just doesn’t seem like the kind of thing she’d go for.

That’s especially true since Laura is the mayor and has a duty to protect the citizens of PC. She may think all of this is too risky. Laura might even convince Felicia of that eventually, but there’s no way Ava’s giving up.

General Hospital spoilers say Ava will get pushy with Carly Corinthos (Laura Wright) on Tuesday. She may seek an ally in this fight against Ryan, but Carly probably won’t bite. After all, she’s got an unborn baby to watch out for.

Meanwhile, Sam McCall (Kelly Monaco) will mull over that tattoo kit she found in community house attic. Since Shiloh Archer (Coby Ryan McLaughlin) plans to brand Kristina as his property, Sam will figure that out and worry about Kristina (Lexi Ainswoth) taking this drastic step. She’ll understand just how much of a threat Shiloh is becoming to her sister.

Over with Michael Corinthos (Chad Duell), he’ll get a warning from Willow Tait (Katelyn MacMullen). Willow will insist that Kristina is in more trouble than Michael realizes. She’ll explain some dark Dawn of Day details and hope she can convince Michael to do something.

Other GH spoilers say Sonny Corinthos (Maurice Benard) will ask Dr. Neil Byrne (Joe Flanigan) for assistance. He’ll wonder if Neil can help Kristina break free from DoD, but it may take some work to get the doc on board. Neil reminded Alexis Davis (Nancy Lee Grahn) that Kristina is a grown woman who’s capable of making her own choices.

Dr. Byrne also suggested some ideas that could get Kristina out of DoD gradually, but Sonny isn’t willing to wait around. Whether Neil helps or not, Jason Morgan (Steve Burton) will head over to rescue Kristina soon enough. Back at the community house, Shiloh will give Kristina one last chance to back out. He’ll contend that this is the point of no return, so Kristina had better be ready to move forward.

Once Kristina reaffirms her faith in Shiloh and “The Trust,” she’ll be given something to drink. Kristina will be told it’s to calm her nerves, but it seems obvious she’s being drugged. The excitement is building, so General Hospital fans won’t want to miss what’s next.

It sounds like another great episode’s coming up. We’ll give you updates as other GH news emerges. Stick with the ABC soap and don’t forget to check CDL often for the latest General Hospital spoilers, updates and news.