General Hospital Spoilers: Meddling Carly Sizes Up Sasha for Michael – Will She Smell a Rat or Sing Sasha’s Praises? 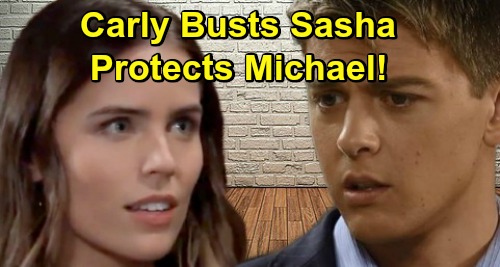 General Hospital (GH) spoilers tease that Carly Corinthos (Laura Wright) will be a meddling mom again. She always watches out for her kids, especially when it comes to their romantic partners. Carly may be particularly concerned about Michael Corinthos (Chad Duell) right now. He’s had a string of tough breaks when it comes to love, so he deserves some happiness.

Michael was also stuck in grief for quite some time. He still has a hole in his heart that can only be filled by Jonah Corinthos, but he’s ready to get back into the dating game. GH fans know Michael hit things off with Sasha Gilmore (Sofia Mattsson), but she backed off once she realized she really liked him, too.

Sasha is keeping huge secrets and doesn’t think she should hang around much longer. After Nina Reeves (Michelle Stafford) and Valentin Cassadine (James Patrick Stuart) tie the knot, Sasha undoubtedly plans to bail. Getting involved with Michael could complicate matters since Sasha might fall hard and want to stay in town.

Nevertheless, Michael feels like he’s stumbled on a potential gem in Sasha. He sees real girlfriend potential, so he won’t give up. General Hospital spoilers say Sasha and Michael will do some bonding on April 18. Sasha just won’t be able to resist Michael’s kind pull, so they’ll share some close moments.

That brings us to meddling Carly. She’ll end up introducing herself to Sasha the next day, so it sounds like she’ll witness the warmth and want to know what’s up. Carly might adore Sasha right away and sing her praises like Nina. Sasha can be quite charming and seems to have a good heart despite her con. She’s come to care about Nina and truly doesn’t want to devastate her.

Since Sasha is beautiful, intelligent and genuinely nice, Carly could easily see her as a great catch for her son. However, there’s also a chance Carly will sense some red flags. She knows Michael was burned by Nelle Benson (Chloe Lanier), so Sasha will go through a thorough vetting process here.

Carly was fooled by Nelle, but will she be fooled by Sasha? Could Carly feel like there’s more to this gal than meets the eye? Time will tell, but Carly clearly intends to insert herself into Michael’s love life. General Hospital spoilers say Michael will have to deal with some drama, so stay tuned.

Do you think Sasha is a good match for Michael despite the phony daughter scheme? Is that something Michael could get past? We’ll give you updates as other GH news comes in. Stick with the ABC soap and don’t forget to check CDL often for the latest General Hospital spoilers, updates and news.